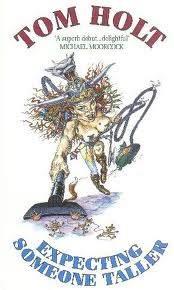 Expecting Someone Taller is a comic fantasy novel by Tom Holt, and, very loosely, a sequel to Wagner's epic opera cycle, The Ring of the Nibelung, set in the modern day. (Don't worry, you don't need to know opera to appreciate the novel.)

Nerdy clerk Malcolm Fisher is driving home one night when his car hits a badger. Stopping to check for damage to the car, he's shocked when the dying badger speaks to him. The badger explains that its name is Ingolf, and it's really the brother of Fafner, the giant who became a dragon in the opera. Malcolm, who knows nothing about Germanic Mythology or opera, is perplexed when the badger hands him a ring, and tells him that he's now the ruler of the world. "Still, I was expecting someone taller."

After listening to a brief synopsis of the historical events that led up to this (i.e. the plot of the opera), the bemused Malcolm takes the ring (which also has the power to summon limitless amounts of gold), as well as something called the Tarnhelm, which lets him change his shape, turn invisible, and teleport, and heads home to think things over. However, Wotan, the King of the Gods, still wants the ring, and soon begins to make trouble for Malcolm. In fact, the next thing he knows, he's got magical Rhinemaidens in his garden trying to seduce him, and dwarfs at the door begging for the ring back. Everyone wants this ring! Could a second Götterdämmerung be in the works?