Literature / The Exploits of Ebenezum 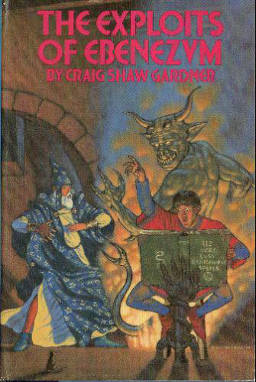 The Exploits of Ebenezum is the Omnibus name for trilogy of comedic satire Heroic Fantasy novels, written by Craig Shaw Gardner. The individual books are A Malady of Magicks, A Multitude of Monsters, and A Night in the Netherhells. They were followed by a sequel trilogy, The Wanderings of Wuntvor.

Despite the name, the most important character in the series is not the titular mage, but his newly-taken apprentice, an eager, well-meaning, somewhat bumbly youth by the name of Wuntvor. Eager to learn magic, Wuntvor's tutelage must be put aside for a moment when his master must fight the dreaded rhyming demon lord Guxx Unfuffadoo, having unintentionally summoned him to the mortal world in the first place. While Ebenezum successfully banishes the demon back to the Netherhells, Guxx places a curse on Ebenezum that causes the wizard to burst into sneezing fits whenever he is exposed to magic — like when trying to cast a spell of his own. So, wizard and apprentice must set off to find a cure to this curse.

Along the way, they encounter a wide cast of truly bizarre allies and acquaintences. Hubert, a dragon who wants to become a vaudeville star (and Alea, a damsel offered to him in sacrifice who becomes his partner). Hendrek, the melancholic mercenary who wields the enchanted club Headbasher. Snarks, a demon who has been outcast from the Netherhells because he must always tell the truth. And Norei, a skilled young hedge-witch who becomes Wuntvor's love interest.

Eventually, Wuntvor and Ebenezum's quest leads them and their motley crew to the City of 1000 Forbidden Delights, Vushta, home to the Greater Vushta Academy of Magic and Sorcery, where they hope to cure Ebenezum at last. To their horror, though, they discover that Guxx has dragged the entire city down to the Netherhells as part of a plan to conquer the world. Wuntvor must venture forth and recover the city to see that his master is cured and the world is saved...