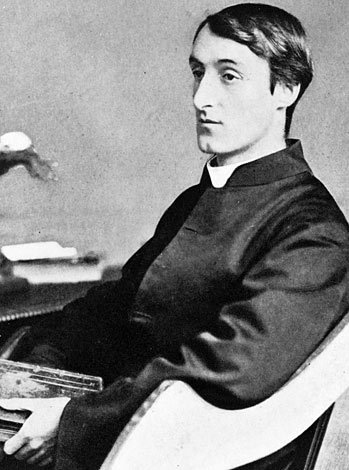 Photograph from before 1889.
"It is a happy thing that there is no royal road to poetry. The world should know by this time that one cannot reach Parnassus except by flying thither."
—Fr. Gerard Manley Hopkins, SJ, Diary Entry on April 1864
Advertisement:

Fr. Gerard Manley Hopkins, SJ (28 July 1844 - 8 June 1889) was an English Jesuit priest and poet. During his life, he was seldom known as a poet, since he published few of his poetry. However, a posthumous volume of his poems, edited by fellow poet Robert Bridges, was published in 1918, and thus Fr. Hopkins became recognised as one of the leading Victorian poets.

Gerard Manley Hopkins was born in Stratford, East London on 28 July 1844 to a prosperous High Church Anglican family: Manley Hopkins and Catherine Hopkins, née Smith. He was the eldest of five brothers and three sisters. Manley was a marine insurance adjuster by trade, and both parents were cultivated in music and literature, encouraging their children to follow the arts. The family moved to Hampstead in 1852, and from the age of ten, Hopkins attended Cholmondeley Grammar School in Highgate. There, he composed his earliest known poem, 'The Escorial', for which he won the School Poetry Prize, one of the five prizes he won.

In April 1863, Hopkins entered Balliol College, Oxford on a Classical Exhibition scholarship. While studying the Classics, he met Robert Bridges, an undergraduate of Corpus Christi College, with whom he developed a lifelong friendship. Hopkins continued writing poetry at Oxford, but during his time there, he found himself becoming increasingly attracted to the Catholic faith, even writing the poem 'The Half-Way House' to reveal his own religious turmoil. In July 1866, he became convinced that he should convert to the Catholic faith; on 21 October 1866, he was eventually received into the Catholic Church by St. John Henry Newman, an Anglican priest who converted to the Catholic faith. His conversion was a source of great anguish to his Anglican family and friends, even jeopardising his friendship with the Anglican Bridges.

In June 1867, Hopkins graduated with First Class Honours in 'Greats', and then taught four eight months at St John Henry Newman's Oratory School in Birmingham. He went on a ten-day retreat at the Jesuit Manresa House, Roehampton the following year; he decided to join the Jesuits and 'resolved to write no more, as not belonging to [his] profession', so he burned the manuscripts of his poems before he entered the Jesuit Novitiate. In September 1870, Hopkins took his first vows as a Jesuit and began a three-year course of study at St Mary's Hall, Stonyhurst in Lancashire. While studying medieval philosophy there, Hopkins discovered the writings of Bl John Duns Scotus, a Franciscan scholastic theologian who, among other things, emphasised the unique individuality of each natural object as it yields its specific pattern to the persistent effort of moving in perception from the lest distinct to the more distinct features of the thing. Such a principle has captured Hopkins' religious imagination, and Bl. Scotus would become one of his major influences.

In 1873, Hopkins began teaching rhetoric at Roehampton and renewed his friendship with Bridges. From 1874 to 1877, Hopkins took his final Jesuit studies at St Beuno's College in North Wales. In December 1875, Hopkins received news that five Franciscans nuns, who fled from Prussia due to harsh anti-Catholic laws, died in a shipwreck while sailing to America. Fr. James Jones, SJ, his superior, urged Hopkins to pick up his poetic pen again, and Hopkins went on to write 'The Wreck of the Deutschland', his first poem in seven years. He completed the poem and had it submitted to the Month, a Jesuit journal, but much to his disappointment, his poem was rejected. On the one hand, Hopkins would not publish most of his poetry, but on the other hand, he felt that he could continue writing poetry without compromising his vocation as a priest.

In 1877, while studying moral theology, Hopkins composed some sonnets, including 'God's Grandeur', 'As kingfishers catch fire', 'Spring', 'The Windhover', and 'Pied Beauty'. He failed his moral theology exams, meaning that he would not progress in the order; Hopkins provided Scotistic answers, while his examiners were Thomists, or adherents to the teachings of St Thomas Aquinas. Despite this, Hopkins was ordained into the priesthood on 23 September 1877.

As a priest, he was devout and conscientious, and his priestly poems were often inspired by his personal experiences of his parishioners and his parochial duties, for example, 'The Handsome Heart', 'The Bugler's First Communion', and 'Felix Randal'. The Spiritual Exercises of St. Ignatius Loyola were also an important formative influence on his poetry, sermons, and spiritual writings. In October 1881, Fr. Hopkins began his Tertianship at Manresa House, Roehampton, and after pronouncing his final vows as a Jesuit in August 1882, he moved to Stonyhurst College to teach Latin and Greek to secular students studying for external degrees of the University of London. In 1883 and 1884, Fr. Hopkins had three letters published in Nature, which describe in vivid detail the dramatic atmospheric after-effects of the volcanic eruption at Krakatoa in August 1883.

In February 1884, Fr. Hopkins moved to Dublin to become a Professor of Classics at the Jesuit’s new University College (formerly the Catholic University founded by Newman in the 1850s), and a Fellow at the recently established Royal University of Ireland, an examining institution. By 1885, he was exhausted by his workload of lectures, compounded by setting and marking six examinations a year for hundreds of candidates; he was also deeply worried about the Irish political situation. The dejection, anxiety and frustration he experienced are poignantly expressed in his letters, meditation notes, and the ‘terrible sonnets’. Nevertheless, Hopkins found respite in the vibrant musical community in Dublin, and from visiting friends in different parts of Ireland, such as the Cassidy family in Monasterevin.

In 1887 and 1888, he wrote some of his finest sonnets, including 'Harry Ploughman', 'Tom's Garland', 'That Nature is a Heraclitean Fire and of the Comfort of the Resurrection', and 'In Honour of St. Alphonsus Rodriguez'. Fr. Hopkins sent his last poem, 'To R.B.', to Bridges in April 1889. On 8 June 1889, Fr. Hopkins died of an enteric illness thought to be typhoid, complicated by peritonitis. Three days later, he was buried in the Jesuit Plot, Prospect Cemetery, Glasnevin, Dublin.

After Fr. Hopkins' death, Robert Bridges collected the many poems Hopkins had sent him, and although he did not edit them for almost thirty years, he finally published the Poems of Gerard Manley Hopkins in 1918. Later editions followed in 1930 and 1949, and Hopkins is now recognized as one of the most influential poets of the Victorian era: an innovator in poetic language and rhythm (Fr. Hopkins developed sprung rhythm, a stress-timed poetic rhythm designed to imitate the rhythm of natural speech). The publication of his diaries, journals, notebooks, letters, spiritual writings and sermons has given us a body of autobiographical and critical writing, which provides a valuable insight into his poetry, and sheds light on his spiritual life and his vocation as a priest.