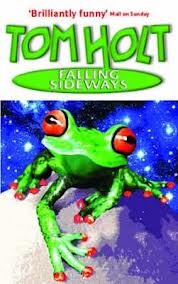 "Would it be all right," David asked, "if I burst into tears at this point?"
Advertisement:

Falling Sideways is a comic fantasy novel by Tom Holt; one of his most bizarre. The book is full of frogs. One of whom may be God.

David Perkins is in love with Phillipa Levens, the fifth marchioness of Ipswich, who was burned as a witch hundreds of years before he was born. He saw her painting in a museum when he was twelve, and it was love at first sight. Now, it's twenty-one years later, and he has just been able to feed his obsession by buying a lock of her hair at auction, when he spots an ad for "Honest John's House of Clones". Which is puzzling, because, as far as he knows, cloning costs millions, and has only been attempted with sheep. Nevertheless, Honest John assures David he can do the job for fifty pounds. Seventy-five, tops. And soon, David finds himself heading home with a woman who is unconscious, naked, and, surprisingly, bright green. (Honest John assured him the effect will fade in a few days.)

The next morning, Phillipa wakes up, and seems completely unsurprised to find herself in a strange apartment, centuries in the future. Then things begin to get strange, and soon David finds himself on the run, framed for murder, while the policemen chasing him keep turning into frogs, and he keeps getting rescued by super-intelligent alien frogs who may have planned his whole life centuries in advance.

The book becomes one long Mind Screw, as David uncovers layer after layer of truth, each of which turns out to be a new layer of lies.