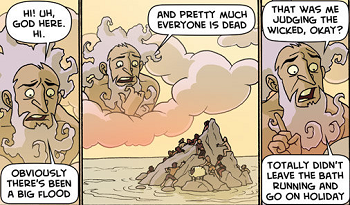 "If it turns out that there is a God, I don't think that he's evil. The worst you can say about him is that basically he's an underachiever."
— Boris, Love and Death
Advertisement:

And in The beginning, God, the Council of Angels, or what have you Created The Universe...

But in retrospect, they botched a few things up in the original design, a few things just don't do what they were probably intended to do, and there's all these little bits of design that make people go "What the...I could have designed this better!" These aren't moral things; there is no refuge in claiming that God Is Evil. It's just shoddy workmanship.

May result in a Karmic Misfire, Crapsack World, Crapsaccharine World, Götterdämmerung, be the cause of the problem that the quest is about, or merely be a peculiar background detail. Not the same as The Gods Must Be Lazy; the design errors may be causing the gods extra work.

God may later try to claim "I Meant to Do That!", explaining the whole thing away as a Gambit Roulette justified by their Omniscient Morality License, and that Obfuscating Stupidity is all part of their master plan... but unless the ending explodes in a hail of Chekhov's gunfire, especially if accompanied by a prearranged divine Ass Pull of divine might, that explanation just never seems very convincing. As a rule of thumb, if a person can, in retrospect, work out how the plan was set up in advance, and some previously arranged coincidences unravel into karmically appropriate boons before the end, it was probably a divine plan. Otherwise, it's probably just bumbling or lacking in the intelligence department.

Essentially, applying the Hanlon's Razor approach to God Is Evil. In other words, God Is Good but incompetent or stupid, possibly even a Clueless Boss.

Compare God Is Flawed (when a deity/God is imperfect, but still manages to do Their job), and Loser Deity. May lead to questioning via Religious Russian Roulette.

Alternative Title(s): The Gods Must Be Idiots