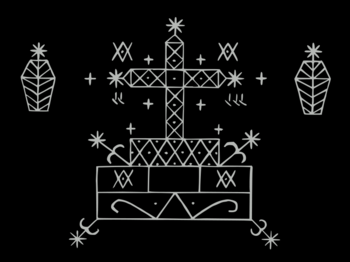 The vevenote summoning sigil of Baron Samedi
African diaspora religion which comes in two major flavors: Haitian Vodou (also Vodun or Voudoun) and Louisiana Voodoo. Both derive from West African Dahomeyan religions, along with Lucumi/Santeria, Umbanda, Candomble, and similar beliefs, which share certain similarities. The slave trade brought these beliefs to the New World, where they became syncretized with the Catholicism and Francophone culture of the slave owners, with a little Native American and Caribbean influence where applicable.
Advertisement:

Louisiana Voodoo is closely tied to hoodoo, a form of folk magic from which come the famous gris-gris bags and mojo hands. Many such practitioners officially identify as Catholic. Haitian Vodou is an ecstatic religion, focusing on possession by the spirits or lwa (loa). This is known as being ridden by the lwa, where the worshipper acts as the "horse" of the lwa. While possessed, the "horse" acts as the lwa itself, and is treated as such.

Although the lwa seem to go by many names, at least in Haitian Vodou the names represent different personalities/aspects of those lwas. So although there are multiple pantheons/nations (Rada and Petwo being the most significant), with different personality traits (anme and doux), they are the same individual, and a different individual all at the same time. Vodou's into paradoxes like that. For example, Ezili can have the suffix of Freda or Danto. The former is the romantic side of love (and is Rada), focusing on lovers, and the latter can focus more on children (and is Petwo). It's kind of like how all the manifestations of the Virgin Mary are still the Virgin Mary, even though they all have their own traits.

Kreyol (Creole) is the language of Vodou, and all common religious songs are in this language.

Some key points in Vodou: