Useful Notes / For the Love of Many 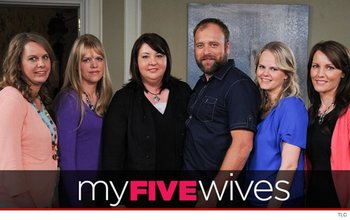 The larger majority of human intimate relationships have involved two people. This couple lives together, likely have children together, have sex with each other, love each other, and don't turn to other people to fulfill any of those needs. However, it is possible to put together intimate relationships that involve more than two people. These situations are what this article is about.

If you're looking at these ideas and thinking that they're primarily about practicality, well, you're right. The idea that a person might Marry for Love—a marriage where the partners' personal happiness is their main priority—is a relatively-new concept where human history is concerned. As recently as 1813, Elizabeth Bennet was still having to decide between marrying for love or marrying for comfort; and before the 1600s, marrying for love was basically not an option whatsoever. Instead, marriages had more to do with child-rearing, economic viability, and social/political alliances. This attitude has not entirely disappeared. Even today, "true love" only goes so far if practical considerations aren't met, like whether or not the partner can keep a job or if one wants kids but the other doesn't.

Incidentally, polygyny was legal in several ancient cultures, including the ancient Israelites of The Bible; Solomon was said to have 700 wives. It's still legally recognised in much of the world, especially in countries where Islam is the predominant faith. (Eritrea, India, Sri Lanka, and the Philippines recognize polygynous marriages among their sizeable Muslim communities, but not among other people.) Polyandry... not so much, and has mostly been practiced in the Himalayas.

The next idea down the list (from most commitment to least) is the idea of polyamory, which is when you are in more than one committed relationship at a time, with the consent of everyone involved. This is a modern variant, focusing on love and dating.

Most people will tell you that, even if you can love more than one person at a time, it's hard to be committed to more than one person at a time, due to the selfish aspects of human nature. Polyamorists disagree. They don't reject commitment, but they do reject exclusivity, jealousy, possessiveness and the negative or limiting emotions that so often seem to come with it. The main difference between this and polygamy is that marriage is not considered a necessary part of a polyamorous relationship. Polyamory that focuses on long-term commitment is sometimes called "polyfidelity". (In practice, committed poly relationships rarely include more than four people at a time.)

Defined broadly, polyamory doesn't have to include romance or sex; it could mean that you want to form significant emotional bonds—of any manner—with more than one person (with the consent of all involved). In that sense you could argue that we are all polyamorists: even people who get married to only one spouse will still have emotional bonds with friends, siblings, parents, and children. Not the same kinds of bonds they have with their spouse, or so we hope, but bonds nonetheless. Generally, though, the world "polyamory" refers to romantic bonds, which are held has distinct from one's family and friends.

Now we start getting into a committed emotional relationship where the partners still having sex with other people—with, of course, the consent of everyone involved.

The root of this level is the understanding that sex and love are not faces of the same coin, and that one does not have to proceed directly from the other. This is patently Truth in Television, regardless of what the "Sex Equals Love" trope would have you believe. It's possible to have sex with someone you don't romantically love (see: casual sex, Friends with Benefits), and just as possible to love someone romantically without having sex with them (see: Courtly Love, Chastity Couple). Therefore, if you have sex with someone, it is neither implied nor required that you love them.

This takes two forms. "Swinging" is typically a pair activity; the couple, together, make choices to include one or more outside people in their sexual activity. In an "Open relationship," partners can make individual decisions about who they choose to be intimate with. The ground rules laid down varies from couple to couple: some only allow random encounters, while others say no randos and only sleep with people they know and trust. Others say "Whoever you shag, just use protection."

And then finally down at the bottom is the idea of the two-person committed monogamous relationship, which is what Western culture (currently) considers the ideal. In this relationship it's against the rules to do anything sexual or romantic with someone besides your spouse/significant other. If you break the rules, you're cheating. If you change the rules, then you're not in a monogamous relationship anymore; you belong to one of the poly* categories discussed already.

You'll notice that none of these relationships give you the right to just go out and do whatever (or whomever) you want, without the consent of your partners. Generally, that's reserved for being single. All these relationships involve being committed to somebody—sometimes more than one somebody—and if you get together with someone when your partner(s) has told you not to, then you are cheating and that's that. This is where multi-partner relationships get tricky. Say you're in a relationship with Sam and Alex, and you then want to sleep with Charlie on the side. Alex is amenable, but Sam says no and won't budge (maybe Charlie was mean to them in high school). It's hard enough to get permission to do anything from one spouse; imagine having to clear your actions with two!

Open relationships can also fall victim to infidelity if one of the partners breaks any ground rules established, especially if outside play is only allowed under specific circumstances. Say, if one partner has a fetish that the other one isn't willing or able to indulge, that partner may have permission to sate their need outside the relationship, but they're only allowed to have sex with each other. Or a couple might have a list of trusted friends that they're allowed to fool around with; sleeping with one of them is okay, but hooking up with a rando would be cheating.

What should be pointed out is that none of these activities have to involve cheating. "Cheating" and "extramarital sex" (or "extrarelationship sex," though this is a less snappy term) are overlapping circles on a Venn diagram, but not identical circles. "Cheating" involves extramarital sex without permission. Extramarital sex with permission, on the other hand, is a significant feature of these relationships. Additionally, there is such thing called "emotional cheating," where you express loving emotions to a third party without the permission of your partner(s) — extramarital Courtly Love, basically. You don't have to even touch someone to break the rules; but, conversely, touching someone does not necessarily break the rules in and of itself.

There is one last distinction to cover: an open relationship versus a closed one. A closed relationship is just that: whoever you're with, that person or those people are it for you for as long as the relationship lasts. An open one can have people added to it.

It's possible to have a closed poly relationship. For example, let's take the television series Big Love, where one man has three wives. If the marriage is closed, then that's it as far as sex and intimacy are concerned; Bill Paxton isn't allowed to get any more wives (or sleep with anyone else on the side), and his three wives are likewise limited to him. If he decides to sleep with a fourth character, that's cheating. Heck, if he decides to sleep with his third wife when it's someone else's turn on the schedule, that's considered cheating too!

With open relationships, partners generally agree that any outside encounters—whether it's with a friend or a rando—are not to go beyond sex. In this case, the primary concern is emotional cheating rather than physical. With swingers, they might only be allowed to play together (or within a swinger space) and not seek outside partners on their own without the other's knowledge or involvement.

Long story short, a "closed" relationship is one that is exclusivenote This article, back when it was written solely by someone who is admittedly mono*, used the word "faithful" here. This word can be offensive to poly* individuals, as the word itself strongly implies cheating, which would be nonconsensual to at least one other partner. The only question remaining is who you're being exclusive with.

Yes, we need to talk about death a little bit here, because there are cultural traditions in which widows and widowers are considered to be still married to their dead spouses. In most modern traditions, marriages are regarded as only valid "until death do us part," so that only living people can be considered married to each other. But in some religions, marriages still exist in an afterlife of some sort, whether or not they actually practice polygamy between living people.note For example, though the Church of Jesus Christ of Latter-day Saints (the largest denomination of Mormonism) has long since prohibited polygamy among the living, they recognize posthumous polygamy between the dead and between the living and dead, meaning that a living person remains married to a deceased spouse and is free to remarry a new living spouse, who will also remain married to them when deceased. Then when the widow or widower themselves dies, everyone they permanently married is considered to still be married to them in the afterlife. This is especially true if divorce isn't an option—Catholicism, the biggest branch of Christianity, subscribes to the idea that if two people get married, they are spiritually linked forever, even if they one day decide they no longer want to be. Catholicism also exemplifies the uncertainty about widowed spouses re-marrying, with one influential writer, Tertullian

, arguing both for and against it at different times.note The modern Code of Canon Law, Can. §1141

, states clearly, "A marriage that is ratum et consummatum can be dissolved by no human power and by no cause, except death (though Can. §1090 makes clear that Murdering the Hypotenuse to exploit this is not acceptable)." Needless to say, marriage customs can be very complicated in this regard.

Finally, there is room for a fair amount of personal discomfort in these things. One person might think the idea of having one monogamous partner for the rest of their life (or the rest of eternity, going by the previous section) would be stifling, unrealistic, and an uphill battle against human nature. Another person might find polyamory exhausting because it's hard enough to maintain one committed relationship, but they might be open to a sidepiece who makes fewer demands. People are bound to have differing boundaries based on their own level of comfort and social energy. Discussing ethical non-monogamy requires raw honesty from all parties involved.