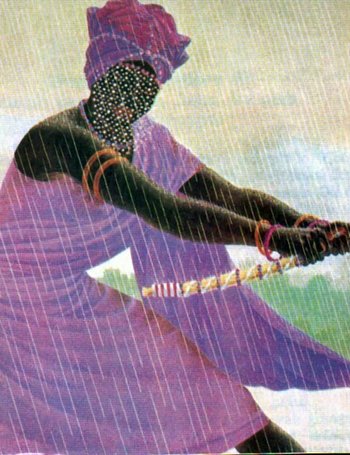 The Gbe speaking peoples are a meta-ethnicity in an area spanning the Lower Guinea region of West Africa from southeast Ghana to southwestern Nigeria. Their branches include the Ewe, Fon, Aja, Mina, and Phla-Phera groups. The Gbe traveled west from a place called Ketu in what is now Benin due to pressure from the vastly more numerous and powerful Yoruba. The very fragmented Ewe found themselves subjects of Akan peoples while the Aja and Fon in contrast built up very powerful kingdoms such as Dahomey and Porto-Novo. Dahomey in particular stood out for its corps of female warriors or “Mino” as such Amazons were called.

But perhaps one the biggest cultural influences Gbe people would spread through the world was their religion known as “Vodun” meaning spirits. Variations on Vodun (“Voodoo” in the New World) are still practiced throughout the Americas. In the early 18th century more than half of the slaves from the Bight of Benin were Gbe, and more than half of all slaves brought to Haiti were Gbe. For this reason Vodun was able to remain especially strong in Haiti. The Gbe speakers much like the Edo and other groups from the Bight of Benin were deeply influenced by the religion of the Yoruba, adopting many gods and customs such as Ifa divination.

Vodun generally concerned reverence of major deities, lesser deities, personal guardian spirits, ancestor spirits, and the usage of magic charms or fetishes. The three pantheons were Land, Water, and Sky gods. Mawu-Lisa had dominion over the Sky pantheon, Hevioso has dominion over the Water/Lightning pantheon, and Sagbata has dominion over the Earth pantheon. Ancestral spirits were actually human meaning they were less mysterious and more benevolent towards their living descendants than the otherworldly gods. Magic charms called “Gbo” were so ubiquitous that even the gods were thought to use them.