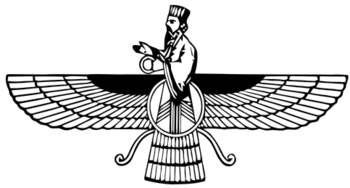 One of the oldest religions in history and in Classical Antiquity, the only major religion in the Middle East other than Judaism and polytheism. Its doctrine centers around an eternal war between Good (represented by Ahura Mazda, or Ormazd) and Evil (represented by Angra Mainyu, or Ahriman). The former can be roughly equated with The Abrahamic God but the latter is definitely not Satan, since Satan is a rebel angel/spirit/former prosecutor fighting his own creator (beginning open rebellion around the time the Persians were running things, for some reason) - thus, Failure Is the Only Option. Ahriman is Ahura Mazda's uncreated Evil Counterpart and thus an equal or near-equal God of Evil who actually has an equally valid claim to the title of "Everyone's Boss" (though akin to Satan, he will lose in the end anyway). Humans have free will, and they face their own personal version of the divine struggle, between Truth and the Lie. Based on one's actions in their struggle, they are either led to paradise (the word comes to us from Zoroastrianism) or hell. Though interestingly, hell in Zoroastrianism is not eternal, but meant to reform people.

An interesting note is that the complex mythology of the religion, involving Ahura Mazda, the Amesha Spentas and ahurasnote  Tolkien fans: think of the Valar and Maiar and demonic daevas is an inversion of Hindu Mythology and (to a lesser extent) Norse Mythology; the ahuras are etymologically related to the Asuras and Aesir, while the daevas are equivalent to the Hindu Devas (and related to the Norse god Tyr and various words relating to, um, divinity in the West). Closely related to it is Scythian Mythology, its gods possibly even having influenced the daeva.

It is usually considered the world's oldest revealed religion, tracing its origin to a prophet called Zarathustra (Anglicized to Zoroaster, via Greek Zoroastres). Historians aren't quite sure when he lived, with estimates ranging from c. 1500 BC to c. 600 BC, though he most likely lived around 1000 BC. He is thought to have lived in what is now northern Afghanistan, though, again, historians are not quite sure. Zoroaster wrote the Gathas and seven of the Yasnas, parts of the text known as the Avesta, which is analogous to The Bible. Incidentally, the Avesta gave its name to the language it was written in, an East Iranian tongue known to us as Avestan.

Zoroastrianism was the national religion of the various pre-Islamic Persian dynasties (the Achaemenides, the Seleucids, Parthians, Sasanids). A heretical form of Zoroastrianism was also followed in Armenia (which for a time was even ruled by a cadet branch of the Arsacid house of Persianote The ruling dynasty of the Parthian Empire) before the kingdom converted to Christianity, with its own native deities thrown in. After the Islamic conquest of Persia they were sometimes regarded as "honorary people of the book" because they were so well-established in their country and were monotheists, and they lived in a second class but tolerable status alongside Christians and Jews. Like the majority of the non-Muslim inhabitants of the Muslim empires, however, the Caliphate's tax policies (in which non-Muslims paid far higher taxes than Muslims, and lacked access to positions in the administrative state and military) led to mass conversions in the centuries following the conquests (to the chagrin of the Caliphate, as they had to find alternative sources of revenue). Rather than convert, many of them fled to India where they remain today as the "Parsees" (a later, smaller group are called "Iranis"). The Parsees were favored in the days of The Raj and had something of a reputation as a Proud Merchant Race.

Among their more interesting customs was the belief in the sacredness of earth, water, and most famously, fire. This led to the custom of keeping an eternal flame at Zoroastrian temples. This also led to the mistaken belief by outsiders that they actually worshiped fire rather than regarding it as a symbol of Ahura Mazda. But one of the stranger aspects of this was the custom of disposing of the dead by placing them in raised platforms ("Towers of Silence") for the birds to eat to avoid desecration of sacred elements of earth and fire by burial or cremation (respectively).

The subject of conversion has been discussed widely among scholars of Zoroastrianism and Zoroastrians themselves. The general agreement is that conversion is taboo only for Parsis and Iranis have no problem accepting conversion, albeit they are extremely discrete about it in order to avoid problems with the Iranian government. Zoroastrians of Iranian descent living in the West have no problem accepting conversion, whilst Zoroastrians of Parsi descent don’t do it, not even in countries where changing religion is not taboo. Some scholars think that the difference came after the first Persian Zoroastrians arrive in India and the local ruler (then Muslim Mughal Emperor) allowed them to stay only if they refrained from conversions, as interfaith conversion was a source of constant conflict at the time in India.note Parsis are also strictly patrilineal – Parsi men pass their customs to their children regardless of whether or not they marry outside the faith, but Parsi women may not; in fact, those women who marry outside are often barred from their ancestral temples. This custom, which was codified by The Raj in 1909, goes against the Zoroastrian tenet of gender equality and was successfully challenged in Indian court. The powers that be still observe the old ways regardless of the courts, and convinced India to restrict a family planning initiative designed to keep the Parsi from going extinct (which will now probably fail because of many ex-Parsi women not being allowed to access it). Not coincidentally, demographers expect the number of Parsees to have fallen below 25,000 by 2020 and probably become extinct by the end of the century. Other branches are not nearly as closed-off, but their numbers are steadily dropping as well. However, very recently a number of Kurds, whose ancestors were adherents of the Zoroastrian religion, have begun returning to it due to a sense of hostility towards them from other Muslim groups. Some activists see this as reestablishing a Kurdish cultural and national identity.

Though now a small religion, Zoroastrians can be found in a number of places in the world. The largest groups in Asia are the Iranian Zoroastrians and the Parsis of India. Probably the best known Zoroastrian in the world was one Farrokh Bulsara, a British Parsi everyone knows as Freddie Mercury. Other famous Zoroastrians include Classical Music conductor Zubin Mehta and actors Erick Avari and Persis Khambatta.

Uses of Zoroastrianism in fiction: