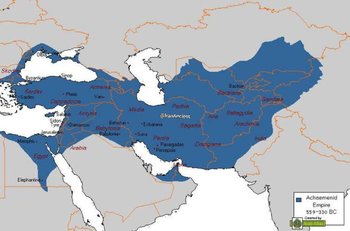 The Empire that kicked off all the other Empires.
[The Persian Empire] left a dream of the Middle East as a unit, and a unit where people of different faiths could live together.
—Neil MacGregor, British art historian and former director of the National Gallery and the British Museum
Advertisement:

The Achaemenid Empire ( Xšāça, "The Empire" in Old Persian) was an ancient Iranian empire based founded by Cyrus the Great. Also called the First Persian Empire, it took its name after the royal dynasty who ruled it from 550 to 330 BC, before Alexander the Great's conquest. To make it simple, it was kind of a Roman Empire before there even was a Roman Empire; it also predated Imperial China by more than three centuriesnote When the Achaemenid Empire was proclaimed, China had not even entered its Warring States era.

The empire's history began when a then-obscure population, the Persians, settled in what today is Iran as vassals of the Median kingdom, which at that time ruled Mesopotamia and the Iranian plateau. In few centuries the Persian royal family, the Achaemenides, managed to supplant the Medians and conquered a lot of more ancient and developed civilizations (the. Medes, Babylonians, Assyrians, and Egyptians), ruling an empire that was a melting pot of civilizations long before the concept even existed. Quoting Neil MacGregor, the empire at its greatest extent from the Northern Balkans to modern-day Pakistan.

Originally vassals to the Median kingdom, in the sixth-century BC Achaemenid Persians revolted against the Median monarchy, leading Cyrus the Great taking over the throne in 550 BC. The Persians then consolidated their influence over the rest the Iranian region, and assimilated the non-Iranian indigenous groups of the region, the Elamites and the Mannaeans (there's still a region in modern-day southwest Iran named Elam after the former population).

Cyrus the Great deserves his own mention, which is expanded in his page. To sum it up, the founder of the dynasty did accomplish some impressive things, like the four-capital system (the capitals were Babylon, Ectabana, Susa and Persepolis) installing the Ur-Example of feudalism, mean the satrapies (kingdoms and regional entities with moderate autonomy), achieving freedom of cult, organizing a bureaucratic apparat, military conscription and a professional soldiers army (the Immortals unit, 10,000 highly trained soldiers), and last but not least an embrional form of postal system. This system lasted for centuries, retained by the following dynasties of Seleucids, Parthians and Sasanians.

By 546 BCE, Cyrus the Great had defeated Croesus, the famously wealthy Lydian king, and gained control of Anatolia, Armenia, and the Greek colonies along the Levant. On the eastern side, he took Parthia, Chorasmis, Bactria and conquered Babylon, famously releasing the captive Jews, thus earning his immortalization in the Book of Isaiah. The following two centuries would be a race to conquer what was left west of Asia... Ancient Greece.

His successors were less successful. Cyrus's unstable son, Cambyses II, conquered Egypt but died shortly after as the result of either an accident or suicide during a revolt led by a priest, Gaumata, who usurped the throne by pretending to be Cambyses' late brother Bardiya until overthrown in 522 BCE by a member of a lateral branch of the Achaemenid family, Darius I. Darius attempted to expand his interest to mainland Greece for a number of reasons: continental Greece supported rebellious Greek colonies under his rule, and he also wished have total control on the trading in the Black Sea.

The Greco-Persian Wars ensued. After two unsuccessful attempts to invade Greece, the Achaemenid empire started to face internal problems. The imperial court was beset by factionalism among the lateral family branches, something that stuck till the last ruler of the Achaemenids, Darius III, was betrayed and killed by his subjects and kins.

The Achaemenid Empire's society was extensively described by Herodotus. The official language of the empire was Old Persian (the ancestor of modern-day Farsi, the language spoken in Iran, Afghanistan and Tajikistan in different dialects) but Aramaic was the lingua franca thanks to the widespread presence of Semitic peoples (Canaanites, Hebrews, Assyrians...) in the empire. Greek also gained a prominence as a bureaucratic and erudite language even before the Macedonian conquest. Ancient Persian rulers followed Zoroastrianism, one of the first monotheistic religions in the ancient world, but had a tolerant approach to the religion of their subjects, sometimes even paying respect to other prominent deities for good publicity.

The House of the Achaemenides lasted roughly two centuries, due to being a large family with plenty of heirs thanks to royal polygamy. According to Greek historians (who we can assume were a bit biased) they may have been a Big, Screwed-Up Family. Given the amount of kings murdered due to internal plotting, one cannot blame them. Still an intensely entertaining dynasty. Here some useful notes for each of them.

The Royal House of Achaemenides

The Battle of Gaugamela cemented the end of the Achaemenid empire. It followed with Alexander the Great seizing Darius III's throne and marry his two daughters to strengthen his claim. This marks the start of the Hellenistic Empire and the hegemony of Greek culture across the Middle East and North-West India, ending along with it the classical era of Ancient Greece. The Achaemenid empire is still revered as a Golden Age for modern-day Iranians, as they still honor the tomb of Cyrus the Great in Nowruz (the Iranian New Year). Modern day historians tend to agree that the Persian Empire was advanced in human rights, government and culture and less of the tyrannical empire Ancient Greeks sometimes liked to depict (they did attempt to conquer them after all...)