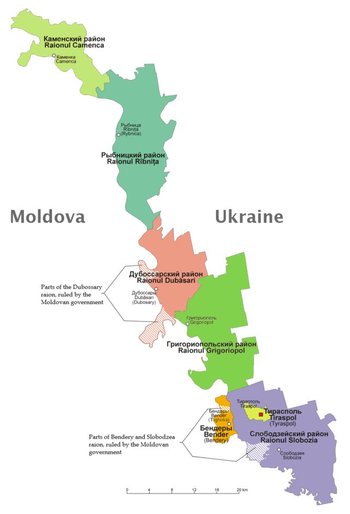 Transnistria is a breakaway country that is de jure a part of Moldova. The name means 'East of the Dniester River' and the name indicates the location. Its full name is the Pridnestrovian Moldavian Republic. The official languages are Russian, Ukrainian, and Romanian (officially called Moldovan and in the Cyrillic Alphabet). While it declared independence from Moldova in 1990 and gained it after a short but intense conflict from 1990 to 1992, it is not considered an independent European country and is only recognized by fellow breakaway states from the former Soviet republics. It is also commonly regarded as a Russian satellite state and widely considered a remnant of the Soviet Union; it still uses the flag Moldova once used as a Soviet Republic as its symbol. Its anthem was a rejected proposal for a new Soviet national anthem. Its capital and largest city is Tiraspol.
Advertisement:

Its origins lay back in 1924, when the Soviets created a Moldavian Autonomous Soviet Socialist Republic in Ukraine to woo Moldovans into revolting against the new Romanian state (which included modern Moldova at the time) and annex Bessarabia to the USSR. When the opportunity came on August 2, 1940, the Soviets simply transformed the MASSR and most of former Bessarabia that was demanded from Romania into the Moldavian Soviet Socialist Republic. During World War II, the Romanians, as part of the Axis, recovered the territories and the lands that composed modern Transnistria and Odessa Oblast of Ukraine were converted to the Transnistria governorate. The Romanian government was infamous in its atrocities there against the Jewish and Roma population. After the war, the situation reverted to the status before the invasion of the USSR.

The part that is now called Transnistria was heavily settled by Russians and Ukrainians, and they were not happy to join Moldova, let alone join Romania if unification of the two Romanian speaking lands happened. The fact that the Moldovan SSR government declared the Moldovan form of Romanian as the sole official language, and reverted the official script back to Latin from Cyrillic, also was seen by separatists as a sign that the majority Moldovan people will forcibly assimilate the Russian and Ukrainian minorities. Indeed, the new government of the Moldavian SSR has been trying to stop a similar independence movement in Gagauzia, a region in Moldova with a Turkish population. And so when the Moldavian SSR declared sovereignty, a dissident group in 1990 declared that a new SSR has been formed, named the Pridnestrovian Moldovan Soviet Socialist Republic. A war ensued against the Moldovan government, and was not resolved until 1992 where the Russian garrison in Transnistria helped the breakaway government to become independent. However, it was not de jure recognized even by Russia, a situation that continues to this day. 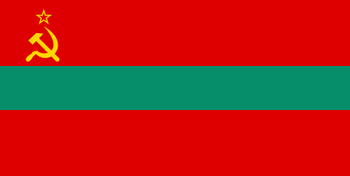 The Transnistrian flag reuses the design of the Moldavian Soviet Socialist Republic flag, consisting of three equal horizontal bands of red, green and red with the golden hammer and sickle and a gold-bordered red star in the upper canton, the only difference from the old Soviet Moldovan flag being that the center bar is a more blueish shade of green.
Government