Land of the Pure.
"Few individuals significantly alter the course of history. Fewer still modify the map of the world. Hardly anyone can be credited with creating a nation-state. Mohammad Ali Jinnah did all three."
—Stanley Wolpert
Advertisement:

Pakistan (Urdu: پاکستان Pākstān), officially known as The Islamic Republic of Pakistan (Urdu: اسلامی جمہوریۂ پاكستان‎, Islāmī Jumhūriyah-yi Pākstān), is a nation in South Asia that was formed from the Muslim majority provinces of The Raj. Before then, the country had largely the same history as other parts of the Raj: India and Bangladesh.

The Indus River, which gave India its name, is mostly located in Pakistan. As a result, Pakistan was site of the Indian subcontinent's oldest civilization, the Indus Valley Civilization. The ruins of Mohenjo-daro and Taxila, both important IVC cities, are located in the country. Due to its location at the doorstep of Central and West Asia, it witnessed countless wars between India and its invading power. The Indus was the eastern extremity of The Achaemenid Empire and Alexander the Great's Macedonian empire. It was also the easternmost extent of the first three Islamic caliphates (from the 650s to the 860s), making it the first region of the subcontinent to be Islamized.

The plan to divide the continent along religious lines was not a new one; the British tried to divide Bengal into a Hindu and Muslim part in 1905. Moreover, partition was not a policy forcefully imposed by colonialism. Indians had been discussing what form an independent India should or could take for decades prior, and partition was a major movement. In fact, the Muslim minority insisted on it, together with the leader of the Muslim League, Mohammad Ali Jinnah. It was thought that the two religions could not coexist in India without one inevitably dominating the other, and therefore the Muslims feared being trapped in a unified India where the Hindus would be a majority. Supporters of partition regarded supporters of a unified India (like Gandhi) as either hopeless idealists or Hindu nationalists. It wasn't until after World War II that the plan eventually came to fruition. However, the implementation of dividing the country along religious lines meant slicing the border through formerly-unified provinces, like the Punjab and Bengal. The Muslims of Bengal were in a unified state with the ethnically diverse Muslims of West Pakistan, meaning East and West Pakistan were geographically separated by 2000 km of India. Significant Muslim and Hindu minorities also remained in these newly independent states, and suddenly those who found themselves on the wrong side of the border desperately scrambled to get across, as each country "cleansed" itself of Muslims and Hindus, leading to bloodbaths and unspeakable suffering. However, while Pakistan has largely cleansed itself of non-Muslims (the country is 97% Muslim), many Muslims remained in India, who today form 15% of the population.

Despite the geographic divide, relations between the two Pakistans were stable until the late 1950s, when the military staged its first coup. The government's heavy-handed measures to bring East Pakistan — which it considered as expendable despite housing more than 50% of the population — into submission gradually fed anger into the region's population. Since the East was overwhelmingly dominated by one ethnic group (the Bengalis) and was basically a nation state, unlike the West, the anger spread fast and wide. Following the arbitrary dismissal of the pro-East cabinet that governed the union in 1970 and terrible relief efforts towards a cyclone that hit the East the same year, resulting in over 500,000 deaths and $86 million in property damage, the East's independence movement truly began. West Pakistan infamously responded by a state-sponsored massacre

(with some calling it a genocide) in 1971. East Pakistan declared independence, with India's help, through the Bangladesh Liberation War

, after which West Pakistan became just Pakistan and East Pakistan became Bangladesh. The Bangladeshi Genocide and subsequent independence, in a sense, proved the falseness of the theory at the heart of Pakistani statehood: that the defining characteristic of Muslim Indians was their religion, not their ethnicity.

Pakistan and India really do not get along, although they maintain embassies in each other's capitals. The two fought a total of four wars: in 1947, 1965, 1971, and 1999. The first time, it was the beginning of The Kashmir Question, whose details are best described in that page. In the end, India gained the better part of the deal with the fertile and populous Kashmir Valley and the majority of ethnic Kashmiris, though Pakistan still captured a large territory (a small amount of Kashmir proper and most of the Karakoram). The 1971 war, on the other hand, was coterminous with the Bangladesh Liberation War. It should be noted that both countries have tried multiple peace overtures over the years, but every negotiation inevitably leads to Kashmir, on which nobody is willing to back down.

Pakistan's relations with Afghanistan have also been consistently frosty, popularly seen as beginning with the Afghan civil war but actually dating back earlier. Pakistan's border with Afghanistan, called the Durand Line, was carved by the British in 1893 following the Second Anglo-Afghan War, separating the ethnic Pashtuns who live on both sides of the border. Needless to say, the Pashtun-dominated Afghan government wasn't happy about this and tried many times to cross over the Line and occupy the Pashtun-populated areas. They didn't end well. Afghanistan eventually gave up in 1976, just a few years before its civil war pitted the American and Pakistani-backed Mujahideen (formed from religious schools of Afghan refugees in Pakistan; during the Soviet invasion, about three million refugees fled to Pakistan) against the Soviet Union. It is, in effect, an open secret that Pakistan hosts and supports various extremist groups with the goal of destabilizing Afghanistan. Pakistan, in turn, accuses Afghanistan of harboring an unrelated militant group (Tehrik-i-Taliban) who has staged deadly attacks on Pakistani soil.

In contrast to its bad relations with its two biggest neighbors, Pakistan is becoming close to its other neighbor: China. China has invested billions of dollars into Pakistan as part of its Belt and Road initiative and, to Pakistan's relief, is neutral about the Kashmir Question. Pakistan in turn supports China's position in world disputes, which controversially includes avoiding the subject of Xinjiang. Pakistan also maintains a working relationship with Iran, despite sectarian differences and Iran's concern of Pakistan being used as a proxy of its archenemies the US and Saudi Arabia, and Pakistanis have consistently viewed Iran positively

, in contrast to its bad press in other parts of the world.

Relations with the United States have seen their ups and downs. Pakistan joined the West during the Cold War, denying the Soviet Union from accessing another warm water port. However, the US increasingly started to question the relationship come the brutal response to Bangladesh's independence movement, followed by Pakistan researching and developing nuclear weapons to catch up with India. The 9/11 attacks and subsequent invasion of Afghanistan energized the relationship, with Pakistan providing the West with information and bases to attack al-Qaeda. It turned sour again when America became more critical of Pakistan's supposedly total unhelpful actions and allegations that it houses the Taliban and other militant groups. The relationship reached its nadir in 2011, when a secretive operation conducted by the US Navy SEAL assassinated Osama bin Laden at Abbottabad, a city located less than 150 km away from Islamabad and just a few blocks away from a military outpost. The operation was done without input from the Pakistani side, because the US feared that doing so somehow would leak the information to bin Laden and allow him ample time to flee, a fear that was vindicated with the revelation that he had been living in Pakistan undisturbed for several years (the common belief at the time was that bin Laden engineered his operations from Afghanistan), meaning that one way or another, the country did have a hand in sheltering him.

Until recently, the country was a primarily agricultural economy. Industries and services have since gone up, with the latter sector eclipsing agriculture in the labor market in The New '10s. The country's main export is textile, while it heavily imports oil, natural gas, and machinery. Pakistan is considered a lower-middle income country and the 39th largest economy in the world.

Pakistan is nominally The Federation, though in practice its more like The Republic (and to its detractors, The Empire) consisting of the four major provinces (population given as of 2017):

And its two disputed holdings in the Kashmir Region (which are a cross between a protectorate, a puppet state, and a province). Note that these two have not been fully integrated into Pakistan, in pursuant to UN-mediated talks. In other words, the people here are not entitled to the same rights as Pakistani citizens, and thus cannot vote and elect members to the Federal Assembly. Self-governance was denied to them at first, too, but it was eventually given in 1975 (Azad Kashmir) and 2009 (Gilgit-Baltistan):

The origin of Pakistanis with Panters and Pak Attack. 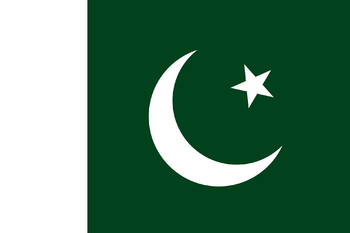 The green field symbolizes Islam, the majority religion of Pakistan, while the white stripe at the hoist denotes religious minorities. The crescent and star are also symbols of Islam, but each also represent progress and light, respectively.
State emblem of Pakistan 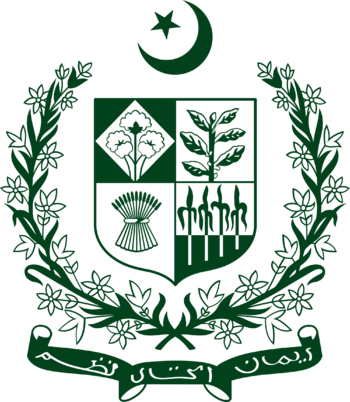 Blessed be the sacred land,
Happy be the bounteous realm.
Thou symbol of high resolve,
O Land of Pakistan!
Blessed be the citadel of faith.
The order of this sacred land,
The might of the brotherhood of the people,
May the nation, the country, and the state,
Shine in glory everlasting!
Blessed be the goal of our ambition.
The flag of the crescent and star,
Leads the way to progress and perfection,
Interpreter of our past, glory of our present,
inspiration for our future!
Shade of God, the Glorious and Mighty.
Government Miscellaneous