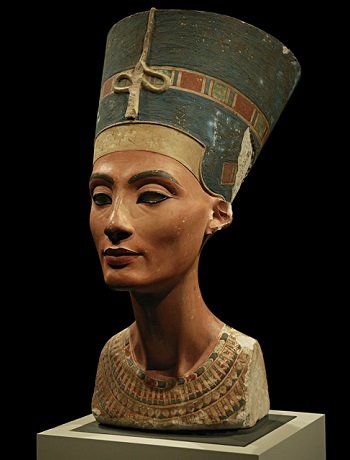 The Nefertiti bust is one of the most well-known pieces of art from Ancient Egypt and a strong contender to the title of most famous bust of all-time. The painted stucco-coated limestone bust depicts Nefertiti, the Great Royal Wife of Akhenaten, an identification made because the iconic cap crown worn by the unlabelled bust is the same one worn in labelled depictions of the queen. The bust's creator is theorized to be Thutmose, the royal sculptor, on account that it was discovered in his workshop in Amarna at the end of 1912. The bust is furthermore given a creation date of 1345 BC and was the one complete bust among several.

The discovery of the bust was made by the German archeologist Ludwig Borchardt, who took it back to Germany with him by downplaying the bust's significance in his excavation reports so that Egypt wouldn't object. The bust fell into the care of James Simon, the sponsor of the Amarna excavation, for less than a year. It was then first lent and later donated to the Neues Museum in Berlin, which put it on display eleven years later in 1924. The bust was a hit with the international community and has been integrated in the Berlin identity ever since. The unveiling also alerted Egypt of the sour deal they'd been manipulated into when they let Germany take part of the Amarna finds. This was the start of ongoing demands for the bust to be returned to Egypt, even if temporarily, all of which have been denied so far. In 2009, the claim arose that the Nefertiti bust is a fake, but material analysis and historical documentation provide no credence to this proposition.

There are two areas of damage on the Nefertiti bust that draw special attention. The first is the left eye, which is missing the painted quartz iris that's glued into the right eye socket by means of beeswax. Suggestions as to why the left iris is missing range from the bust not being completed, Nefertiti herself having had an eye condition, the iris having fallen out (and never found despite intense searching), and the iris being intentionally removed for teaching purposes. While there's no conclusive answer, at least the first two suggestions have been deemed unlikely because everything else about the bust is complete and no other depiction of Nefertiti is one-irised. The second area of damage is the missing uraeus, the upstanding cobra signifying the divinity of the pharaoh, that should've been at the base of the yellow vertical line running down the cap crown. This piece is broken off and, like the left iris, has never been found. Modern depictions in art and fiction of Nefertiti wearing her crown may or may not include the uraeus.

Aside from its antique art fame, the Nefertiti bust also influenced the modern Western horror landscape by being the inspiration behind the Beehive Hairdo of the Bride in the 1935 film Bride of Frankenstein. Whether there's also a connection between the bust, as part of Ancient Egypt's image, and the Bride's mummy-esque elements is unknown and it should be noted that links between Frankenstein's Monster and mummies precede the film.

The Nefertiti bust provides examples of: