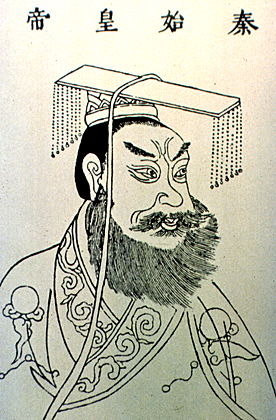 All Under Heaven.
Advertisement:

Qin Shi Huangdi (259-210 BC) is the founder of the Qin Dynasty, first Emperor of China, and depending on who you ask, either one of the most ruthless despots in history whose name would become a byword for tyranny, the exemplary Emperor who united the fractured Warring States and brought a standardized system of characters, measurements and language, amongst other sweeping reforms, and lay the groundwork of the millennia of stability and prosperity that brought China to the forefront of world powers, both, or anything in between. The very poster boy of Alternative Character Interpretation, as it were. In Chinese historiography, he was commonly mentioned together with Emperor Wu of the Han Dynasty, "Qin Huang Han Wu" (秦皇汉武). In fact, some historians theorized that Emperor Wu would have led the Han to ruin, if he had not reflected on his mistakes late in his reign.

He was born Ying Zheng （嬴政）, the son of a young concubine given as a present to the then crown prince of Qin, Zichu, by the scheming merchant Lü Buwei (who may have been his biological father, at least according to Han Dynasty propaganda). note Even if Lyu had been Ying Zheng's biological father, Zichu had little to complain about, for Lyu was the one who worked behind the scenes to convince Zichu's father King Xiaowen to make Zichu heir, and assisted Zichu to return to Qin safely to ascend the throne, as Zichu was then a hostage in the state of Zhao. China was at the time in the throes of the Warring States era, when the impotent Zhou Dynasty had disintegrated into several rival kingdoms note The final lands held by the Eastern Zhou were conquered by Zichu's grandfather King Zhaoxiang in 256 BCE, when Ying Zheng was about 3 years old, and the state of Qin had emerged as a power to be reckoned with. He became king in 247 BC after the death of King Zhuangxiang (the above-mentioned Zichu, who reigned for only 3 years). note Before Zichu, his father King Xiaowen ruled as king for about a year, and died just 3 days after coronation, while King Zhaoxiang had reigned for 57 years.Advised by Legalist philosopher Li Si, he turned Qin into a quasi-totalitarian military powerhouse and embarked on a campaign of conquest to unify all of China under his rule. note However, Qin's major reforms were begun under Shang Yang, the alleged author of The Book of Lord Shang about a century prior. He annexed other kingdoms one after another; in 221 BC, Ying Zheng declared himself First August Emperor of the Qin Dynasty (Qin Shi Huangdi).

He ruled China with an iron fist and ruthlessly crushed any opposition, applying the precepts of Legalism, which holds that a monarch must reign through fear and that the law must be enforced without pity in order to scare the populace into submission. While certainly ruthless, however, it should be noted that Ying Zheng was not corrupt or inept: A workaholic, he implemented a series of policies standardizing currency, language, weights and measures, and even the width of carriage axles, and in so doing created 'China' as we would hence know it. He was also responsible for the Qin Empire abolishing feudalism and adopting a state bureaucracy based on law more than a thousand years before the first European kingdom ever did so. note However, it must be noted that the tendency to adopt feudalism did not immediately go away. During the Han Dynasty, a dual system of feudalism and state bureaucracy was implemented. This dual system lasted until Emperor Wu, who greatly curbed feudalism during his reign. He ordered the construction of the Great Wall to protect the empire's northern frontiers against barbarian attacks. note Like Emperor Wu a century later, Ying Zheng also sent troops to attack the Xiongnu, pacifying them for some time. To abolish history, he had all books burnt save those containing useful technical information note It should be noted that Ying Zheng's policy could be seen as a logical conclusion; previous Qin rulers had burnt books ever since the adoption of Legalism., and then ordered a mass execution of "scholars" for good measure. note Historically, Confucian scholars formed only a tiny minority of the chaps he buried in the alleged incident. Most were "fangshi"( 方士), charlatans who preyed on Ying Zheng's obsession with immortality. He did actually keep one copy of each destroyed book in his own library for the ruler's use in case it contained anything useful to him or future monarchs; however, this library was destroyed in the fires that ravaged the imperial capital at Xianyang after Xiang Yu's armies took over from Liu Bang's in 206 BCE. note The rivalry between Xiang and Liu quickly escalated after this incident. (Qin Shihuang is therefore more or less one of the two men responsible for making Chinese works no older than Older Than Feudalism; outside of some tropeless oracle bones and bronzes, everything Older Than Dirt went up in smoke.) note For some reason, Xiang Yu's role in actually lighting the fires which burnt the library largely went unnoticed and unscrutinized.

Traditionally featured in children's tales as an extreme caricature of a corrupt tyrant, it is only until recently that history has approached a fair perspective of his rule. Since then, he is now a divisive figure, ranging from a tyrant who is Drunk On Power and obsessed with immortal life, to the paragon of a ruler who, although grandiose and extravagant, nonetheless created the concept of "China" out of a bunch of squabbling, fractured states, and whose staggering casualty rate is but the natural result of sweeping reforms that ended up benefiting thousands of generations after at the cost of the current onenote Of course, changing social and other types of institutions isn't going to be achieved in less than two decades. Later, after the establishment of the Han, Liu Bang and his team refined the system of governance, mainly by leaving out the most extreme forms of punishments and controls in the Qin legal code.. In fact, the reforms implemented by him were so lasting and effective at topping the old order of things, when the Qin dynasty was overthrown soon after his death, it was just plain impossible to go back to the previous order or try any sort of return to status quo - even the provinces were reorganised and redrawn to break old power structures, making it simply impractical at any attempt of restoration.note Most of those provinces exist unchanged to this day.

Just a small caveat: the so-called "Confucians" that were buried alive, grisly as that act was, were actually wizards (fangshi; 方士) who were put in charge of concocting an elixir of immortality, according to some other sources. Since Confucianism and Legalism were polar opposites (the former declares that education and cultural immersion should be the way to achieve state order and prosperity, while the latter emphasizes that the law should be upheld in absolute terms for the same thing to happen) and thus political rivals, as one of Legalism's greatest champions, Qin Shihuangdi was essentially subject to a massive Historical Villain Upgrade. Needless to say, seeking immortality was doomed from the start, but it would remain a fascination for many emperors and occultists to come.

A big part of Qin Shihuangdi's image issues is that official Chinese historiography always tended to sing the praises of the predecessor dynasty's early rulers, while then painting the later ones in the darkest colours possible. This was used to justify the incumbent dynasty's rule or ownership of the Mandate of Heaven. However, because the Qin was so short-lived, and yet set a precedent, later historians would vilify its founder right away. New archeological findings (such as legal codes) show the Qin dynasty to be much more "mainstream" than the crypto-totalitarian legalistic dystopia it has been depicted as. In more recent years, Shi Huangdi has been increasingly depicted as the founding father of China who forged an orderly unified state out of chaos through force and foresight by the official state propaganda in both the KMT state of the Republic of China and the CCP-ruled People's Republic.

One thing that is not in dispute, however, is Qin Shihuang's later-reign obsession with immortality, both literal and figurative. In search of the former, he began taking supposedly life-extending treatments recommended by Imperial alchemists; while some of these, like wood-ear and cloud-ear fungi, are fairly harmless (and tastynote Cloud ear and wood ear fungi are still commonly used in Chinese cooking for their interesting textures, and many other Chinese medicines are basically just food), many such treatments involved mercury compounds. You read that correctly; ancient Chinese alchemists thought that a heavy metal that drives you insane before killing you was part of the recipe for eternal life. Perhaps it's no surprise then that the emperor grew gradually more paranoid in his later life (paranoia being a prime symptom of chronic mercury poisoning) and then died after taking a pill containing pure mercury as part of his immortality treatments (death being a prime symptom of acute mercury poisoning). At the time of his death, he was on his fourth tour of Eastern China.

In the figurative department, Qin Shihuang oversaw the construction of his future mausoleum. According to historian Sima Qian, this project required drafting a slave workforce of 700,000 people. The mausoleum was erected in a secret location and was only discovered in 1976. Within three years of his death, the third and last king of Qin was killed by Xiang Yu. Another 4 years of warfare continued, until Liu Bang established the Han Dynasty in 202 B.C..

Another of his mistakes which is not in dispute is his handling of the succession, which can be said to be partly influenced by his obsession with immortality; after all, who needs proper succession when you can be immortal? By not having a crown prince, and a dismissive attitude towards his officials, upon his death, two such officials (Li Si, who was then Prime Minister, and the eunuch Zhao Gao) decided to nominate Ying Zheng's younger son Hu Hai (who was together with them on the tour) as the next emperor instead of his elder son, Fu Su (who was away at the Great Wall with Meng Tian as he had been punished by his father after father and son had some disagreements over state policies). They sent a letter ordering Fu Su to commit suicide, with Ying Zheng's forged signature. Fu Su's allies denounced this as the forgery that it was, but Fu Su himself (unaware that his father was dead) could not believe anyone would dare to forge an imperial decree and thus complied with it. The silent coup also killed the Meng brothers (Meng Tian and Meng Yi), who were allies of Fu Su. The most ghastly details were the methods used by Li and Zhao to conceal the fact that Ying Zheng had died. Firstly, Li Si ordered that two carts containing rotten fish be carried immediately before and after the emperor's wagon. (The idea was to prevent people from noticing the foul smell emanating from the Emperor's wagon, where his body was starting to decompose severely as it was summertime.) The shade was also pulled down, so that no one could see his face; servants continued to change his clothes daily, and bring food.