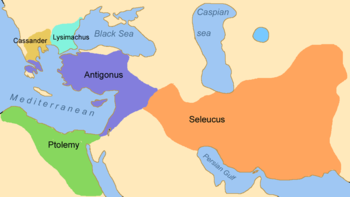 The Simplest Map that explains this mess
We the Alexandrians, the Antiochians,
the Selefkians, and the countless
other Greeks of Egypt and Syria,
and those in Media, and Persia, and all the rest:
with our far-flung supremacy,
our flexible policy of judicious integration,
and our Common Greek Language
which we carried as far as Bactria, as far as the Indians.
— C. P. Cavafy, In the Year 200 BC
Advertisement:

The Macedonian Succession Wars, also known as the War of the Diadochi, was a series of wars and conflicts that broke out in the wake of Alexander the Great's conquests and his death. Diadochi or Diadokhi means successors, and to this very day it is regarded by historians, and geographers, to be the single most complex and tangled Succession Crisis in recorded history, enveloping not only mere bloodlines and families, but the geopolitical map of one of the greatest land empires in history, and utterly transforming the histories, societies, and cultures of many nations, including (among others) Iran, India, Afghanistan, Egypt, and Turkey.

At the end of it, Greece would be utterly spent and exhausted, absorbed by The Roman Republic who in the course of their expansion gradually swallowed all the Greek Kingdoms, with Ptolemaic Egypt being the longest hold-out. The Persian empires crushed by Alexander would revive under the much stronger Parthian Empire, who by absorbing and innovating upon Alexander's tactics, ensured that Rome would never spread to the East for the entirety of its history - Trajan came the closest but Hadrian - concluding that it was impossible to hold - withdrew from the territory Trajan had conquered. In India, Chandragupta Maurya became the first Samrat (Emperor) in his nation's history, ruling over a large land empire that stretched from Bactria (Afghanistan) to Eastern and Central India. However, most importantly, at the end of the conquest, Greek became the lingua franca of the East, and Greek and Hellenic culture spread from the Dardanelles to beyond the Indus River. The Hellenistic age which syncretized with native religions and ideas transformed the region forever. Buddhist sculptures discovered in Gandhara (itself based on Kandahar, derived from Iskander, i.e. Alexander) show the strong impact of Greek influence on local traditions. The inscriptions of the Mauryan Empire were multilingual, mixing the Indian Pali script with Greek (in a manner not dissimilar from the Rosetta stone).

The Macedonians as a kingdom tended to rely on Asskicking Equals Authority, and succession by primogeniture was more guidelines than actual rules. After all, Alexander himself was not entirely the favored successor of his father Philip II, and his mother Olympias had to maneuver to ensure that Alexander was truly Basileus (King), and by "maneuver", we mean killing Philip II's other wife and child, and maybe orchestrating the death of Alexander's baby brother. On his deathbed in Babylon, Alexander's last words, responding to one of his companions on who should succeed him was "Kratistos" (To the strongest). At the time, Alexander married the Bactrian noblewoman Roxana (not to be confused with the same-named mistress of Alexander's father who came from a barbarian tribe) who was pregnant at the time of his death. There was much ambiguity as to the sex of the child, and Roxana had not yet carried the child to term. Most of the grants, titles, lands assigned to his generals came from Alexander himself. Many of these generals were greedy for land, and wary of Alexander's policy of intermarriage with locals and bringing West and East together, were looking to go their own way. After Alexander's death, Perdiccas became co-regent and settled a temporary compromise that more or less took a wait-and-see approach while the child was born. Perdiccas sent Alexander's wife back to Macedonia where Olympias looked after her daughter-in-law. Roxana for her own part was following in the steps of her mother-in-law by reputedly killing Alexander's co-wife Stateira II. However, some of the generals (particularly those in Asia) felt that Alexander's half-brother, Philip III (named Arrhidaeus), should be crowned king. The problem was that he was mentally stunted from birth, and would thus be merely a figurehead for the more powerful noblemen surrounding him. Lastly, there was Alexander's sister Cleopatra of Macedon and his half-sister Thessalonike. Cleopatra was highly sought after as a bride, as anyone who married her would have a strong claim to the throne of Macedon by marrying into the current ruling Argead dynasty. These issues were not about clarity of succession, but about finding the right candidate to back on whom they could then piggyback their power.

In 323 BC, Perdiccas negotiated the Partition of Babylon, which basically carved up the different satrapies of Alexander's generals The major satraps were Antipater, Alexander's appointed regent of Macedon, Ptolemy I Soter who was granted Egypt, Antigonus Monophthalmus (literally "Antigonus the One-Eyed"), Craterus, and Perdiccas himself. Perdiccas, aided by his loyal satrap Eumenes, wanted to consolidate Alexander's empire by marrying Cleopatra, but his expansionist ambitions were curtailed by an alliance of Antipater, Craterus and Antigonus. Eventually, after a failed invasion of Egypt (spurred by Ptolemy stealing Alexander's body on its way to Macedon), he was assassinated by his lieutenants, most notably Seleucus. For his troubles, Seleucus would be granted the province of Babylon. Within Greece, Alexander's death unleashed hopes for rebellion on the part of many Greeks who wanted to liberate themselves from Macedonian hegemony. Antipater had already suppressed one rebellion while Alexander was away on his conquests and after his death fought the Lamian War waged by Athens and allies. At the end of this war, Athenian democracy was finished forever, with a new constitution introduced to construct a plutocracy. Demosthenes, the great orator who had rallied the people against Philip II of Macedon and Alexander, died after being exiled by Antipater, and the general Leonnatus died in the fighting.

The second major conflict was largely between an alliance of Cassander, the son of Antipater, and Antigonus against Cleitus (not to be confused with Cleitus the Black) and the successor Polyperchon. Upon Cassander's victory in the Macedonian front, he ended any ambiguity regarding the succession to the Macedonian throne by marrying Thessalonike, having Olympias (who sided with Polyperchon) stoned to death, and finally having Queen Roxana and her son (briefly King Alexander IV) quietly put to death. The line of Philip II and Alexander was largely snuffed out, as Philip III and his wife Eurydice were forced to commit suicide years earlier, and Cassander was left sole ruler of Macedon. To the east, Antigonus defeated Eumenes and secured the eastern satrapies, and later had Cleopatra of Macedon poisoned to put the final nail in the Argead coffin. The largest consequence of this war, however, was the realization that Alexander's empire could not be reunified. The various successors would have to permanently carve out their own kingdoms and rule separately.

Eventually, Cassander's sons were defeated and deposed (executed) by Antigonus' son Demetrius I, who in turn was defeated by Seleucus after a failed invasion of Asia Minor. The Antigonid Dynasty, however, was saved by the intervention Antigonus II Gonatus, Demetrius' son, who saved Macedon and Greece from an invasion of Gauls marauding through the Balkans. These Gauls would later settle in Asia Minor. But at long last, after nearly 50 years of fighting, a sense of stability had been reached. Ptolemy would rule in Egypt, Seleucus would rule in Asia, and Antigonus Gonatus would rule in Macedon.

Much of what happens gets confusing because borders kept moving back and forth and a number of dynasties and states came into being. Militarily this was a time of elaboration of Greek and Macedonian techniques. As every army was descended from Alexander's Badass Army they could gain no tactical advantage over one another though they tried all kinds of techniques including the use of elephants. The result was simply a tie between the powers involved, and victory often came through bribery, assassination, and low-cunning rather than ingenuity. Some of the Greek adventurers felt they might do better turning West rather than East, only to come face to face with The Roman Republic. The first to do so was Pyrrhus of Epirus, the Trope Maker of Pyrrhic Victory, and whose battles proved that the Roman Legion were superior to the Macedonian phalanx, and whose withdrawal led the Ptolemaics to establish diplomatic relations with the Romans. Eventually the Roman Republic defeated the Macedonians and the Achaeans, taking over all of Greece in the Battle of Corinth in 146 BCE after the end of the third Punic War (Carthaginians had allied with the Greeks at the end of that). The campaigns of Sulla Felix and later, Pompey the Great extended Roman control over Asia Minor, ending the Seleucid and Pontic Kingdoms (who had already been drained by the Parthians), and after defeating King Pharnaces II in the Battle of Zela, Julius Caesar snuffed out the active remnants of the Diadochi successor kingdomsnote At the end of that Curb-Stomp Battle, Caesar muttered in a letter boasting of his achievement: ''Veni, vidi, vici.

The Ptolemaic Kingdom of Cleopatra VII was the last of the Diadochi. It was also the Kingdom with the most enduring cultural contribution. The city of Alexandria, under Ptolemy I Soter and his successors became the City of Adventure in the Ancient World with a Library and research institution whose contribution to culture, science, philosophy, was proverbial. Ptolemy I Soter patronized Euclid, and other geographers, astronomers, and thinkers over the decades. Hellenistic Alexandria became the center of Neoplatonism, Gnosticism, and much cultural research. The yield of the Ptolemaics is still being measured since the discovery of the Oxyrhynchus Papyri (found in the ruins of a Greek city in Egypt), which was found in 1896 and which as of the 21st Century has only seen a small handful (5000) translated of more than half a million papyrus. The Ptolemaics however being that they took to Brother–Sister Incest became a microcosm of the entire brutal era of violent succession, since they routinely fought and killed each other to cement their rule, and succession was never stable, and the city of Alexandria was rather unruly and prone to riots. In the end, it fell to Rome, and became the personal property of Augustus and his family.