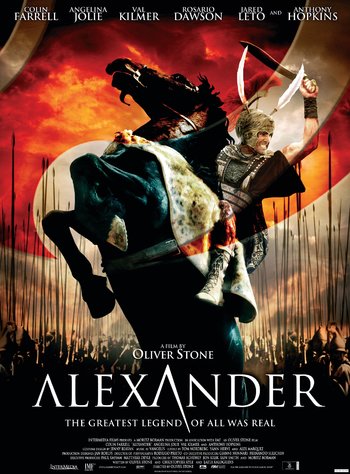 "Conquer your fear, and I promise you, you will conquer death."
Advertisement:

Alexander is a 2004 epic biographical film directed by Oliver Stone about the life and death of 4th century BC Macedonian king and conqueror Alexander III The Great. The film stars Colin Farrell in the title role, along with Angelina Jolie and Val Kilmer as his parents, and Jared Leto, Christopher Plummer, Rosario Dawson, Elliot Cowan and Anthony Hopkins in further supporting roles. Vangelis composed the soundtrack.

The son of Phillip II and his wife Olympias, Alexander, becomes king of Macedon after his father's murder, and throws himself into a series of conquests the scale of which the world has never seen before, starting with Greece and moving on to Persia, Egypt and India. Throughout the journey, Alexander has to struggle immensely with the logistics of his conquests, his limitless ambition, and his intimate turmoils.

The film is framed by the narration of one of Alexander's generals, Ptolemy, who became ruler of Egypt as Ptolemy I Soter after the Macedonian Succession Wars. He does so in 283 BC, 40 years after Alexander's death.