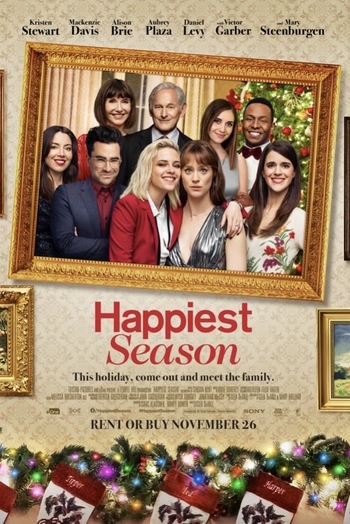 "Everybody's story is different."
"Yesterday I never felt closer to another person in my entire life, and now I don't know her."
— Abby
Advertisement:

The story follows a lesbian couple, Abby (Stewart) and Harper (Davis), as Abby accompanies Harper to her family's house for Christmas. Abby's plan to propose on Christmas morning is complicated by the fact that Harper has not yet come out to her family, a well-off, conservative White Anglo-Saxon Protestant clan comprised of proper parents Ted (Victor Garber) and Tipper (Mary Steenburgen), uptight ex-lawyer and "super mom" oldest sister Sloane (Alison Brie), and misfit middle sister Jane (Holland). Instead, they think Harper has merely taken pity on her orphaned roommate and brought her along so she won't spend the holidays alone. Things are further complicated by the fact that Ted is running for mayor, which puts extra pressure on Harper to keep up appearances.

♬ You're the only girl I've got on my list
I write your name, I know it's foolish
But I chase the feeling 'cause you keep me dreaming
That I could make you mine
Make you mine this season ♬