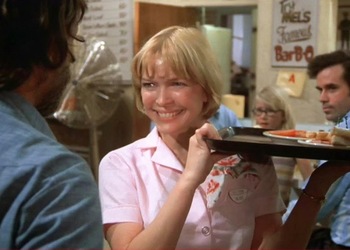 Alice Hyatt (Burstyn) is a woman in her mid-thirties, living in New Mexico and stuck in an unhappy marriage to truck driver Donald (Billy Green Bush). She becomes unstuck when Donald gets killed in a traffic accident—but she is also alone and jobless and responsible for her 12-year-old son Tommy (Alfred Lutter). Alice briefly worked as a nightclub singer in her home town of Monterey, California prior to getting married, so she elects to try that again. Eventually she winds up in Tucson, Arizona, where dire financial necessity forces her to take a job as a waitress at Mel and Ruby's Café. There she makes friends with her fellow waitresses, sassy Flo (Diane Ladd) and meek Vera (Valerie Curtin), and finds love with rancher David (Kristofferson).

Burstyn, who was given creative control of this film after starring in smash hit The Exorcist, personally selected up-and-comer Scorsese to be the director. The film won her an Academy Award for Best Actress. It was adapted for television as the sitcom Alice, which became a big hit and ran for nine years (1976–85) on CBS. Vic Tayback, who appears in the film as cranky diner owner Mel, reprised his role on the TV show, while Diane Ladd, who plays Flo in the movie, later joined the series as a different waitress character.

One of only two Martin Scorsese films with a female protagonist (Boxcar Bertha is the other one).