Film / Alice in the Cities 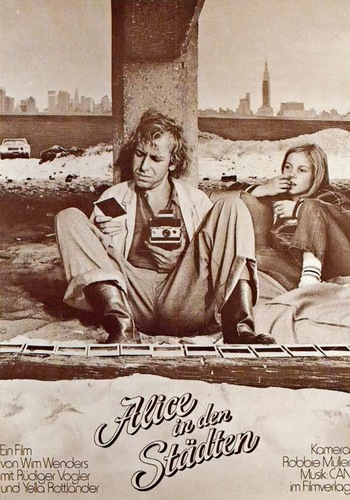 Alice in the Cities is a 1974 film from West Germany directed by Wim Wenders.

Philip Winter is a 31-year-old newspaper writer. He has been road-tripping around the United States trying to write an article about "the American landscape", but hasn't been able to come up with any copy, only taking Polaroid pictures. When he gets to New York without any story, his extremely irritated editor cancels his trip and tells him to go home.

Going home is not that easy, as an airport worker strike has cancelled all flights into Germany; Philip has to settle for a flight into Amsterdam. While at the airport he strikes up an acquaintance with Lisa, a German woman, and her nine-year-old daughter Alice. Lisa is trying to get back home to Germany while also having to deal with a troublesome boyfriend who wants to stay in the USA.

Lisa winds up chasing after her boyfriend, making the reckless decision to leave her daughter in the care of Philip, whom she has known barely a day. Luckily for her Philip is a responsible fellow, and he dutifully escorts Alice to Amsterdam. Unluckily for Philip, Lisa does not show up at the airport in Amsterdam, leaving him stuck with a nine-year-old girl. Lacking any better ideas, Philip takes Alice to the city of Wuppertal

, where Alice thinks that her grandmother lives, even though Alice can't remember the address, or the phone number, or Grandma's actual name.