Film / All About My Mother 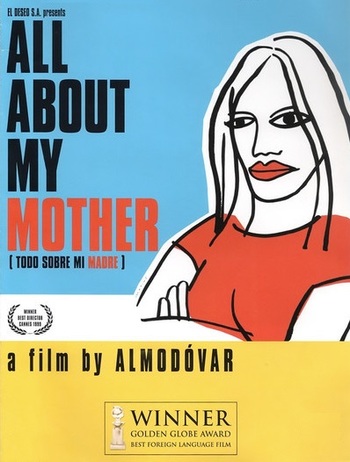 All About My Mother is a 1999 film from Spain by Pedro Almodóvar, starring Cecilia Roth and Penélope Cruz.

Manuela (Roth) is a middle-aged nurse who works at a hospital in Madrid, and is in charge of the hospital's organ donation program. She is a single mother to an only child, Esteban, who has dreams of being a writer. On his 17th birthday, Esteban is struck by a car and killed while trying to get the autograph of Huma Rojo, a prominent actress. Manuela, stricken with grief, leaves for her old hometown of Barcelona. She is searching for Lola, Esteban's father, who is now a transvestite prostitute. Among the people she meets in Barcelona are her old friend Agrado, a transsexual prostitute; Rosa (Cruz), a nun who happens to be pregnant and HIV positive; her son's idol Huma Rojo, and Huma's lover and fellow actress Nina.