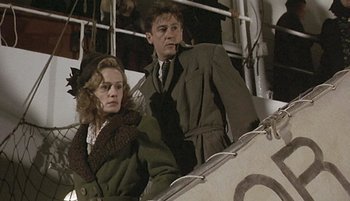 Russia, 1946. In the wake of the Soviet victory in World War II, Josef Stalin has issued a blanket amnesty for all Russian expats who have been exiled since Red October in 1917. The film opens with a boat bringing exiles back from Franch. Among them are Aleksei Golovin (Menshikov), his French wife Marie (Bonnaire), and their 7-year-old son Seryozha.

The hopes of the new arrivals are crushed the moment they arrive at the dock. Stalin's "amnesty" was a grotesque trick, and instead everyone arriving on the boat is either imprisoned or executed. Everyone, that is, except Aleksei and his family, because Stalin's country needs doctors. The Golovins settle down to a grim existence in Kiev. Marie starts demanding to go home, while Aleksei starts integrating better into Soviet life. Marie's deep unhappiness drives a wedge between the couple, and both have affairs, Marie's with a young competitive swimmer named Sasha (Sergei Bodrov) whom Marie resolves to help escape.

Catherine Deneuve has a small role as Gabrielle, an actress who helps Marie and Seroyozha escape back to France.