Film / Talk to Her 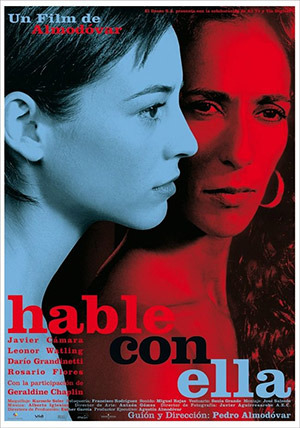 Talk to Her (Hable con ella) is a 2002 Spanish comedy-drama film by Pedro Almodóvar. It features Marco, a writer and Benigno an orderly, who both struggle with the implications of the women of their lives being stuck in a persistent vegetative states.

The film begins with Marco, an otherwise tough and masculine man being brought to tears while seeing a ballet. Next to him is Benigno a sweet, harmless looking dude who is moved by Marco's reaction. They almost meet, but they don't.

Next we see Benigno back at his job at the clinic, taking care of a very very pretty young girl in a coma, named Alicia. We quickly find out that he is deeply in love with her, and only works at this clinic to be close to her.

We learn that Marco is a sad, sensitive man who pines for a lost love. He is given an assignment to interview a fiery but emotionally damaged woman named Lydia, who happens to be a bull fighter. Although their meeting is initially fraught, the two eventually hit it off and become lovers.

Through a series of flash backs and flash forwards, we learn more about Marco's relationship with Lydia until she is gored by a bull and put in a coma.

Their friendship and Marco's acceptence of Lydia's state is the focus of the film.

This film is an example of the following tropes: