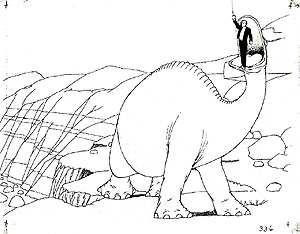 "Gertie will now show that she isn't afraid of me and take me for a ride."
Advertisement:

A groundbreaking 1914 theatrical short subject from the mind of Little Nemo creator Winsor McCay, Gertie the Dinosaur is a landmark short in personality animation, influencing many artists and future animation pioneers, including Otto Messmer, Paul Terry and Walt Disney.

The reason for the cartoon being made spawned from criticism of Winsor's earlier shorts Little Nemo and How a Mosquito Operates, with skeptical audience members (wrongly) accusing him that he traced off of live-action footage to animate the human characters — so Winsor proceeded to push his mastery of perspective and mass to the limits and created something that you couldn't get from live action. And boy, did he succeed.

The cartoon came in two versions: the full version with Winsor appearing in a live-action opening, and the roadshow version which only has the Gertie footage. One studio even created their own unauthorized knockoff of the film!

See the full, unabridged version of the cartoon, in two parts, here

Gertie was to receive a sequel short called Gertie on Tour

, but it was ultimately left unfinished, and sadly only a fragment of it has survived, barely lasting over a minute.

Walt Disney World has also made a little tribute to Gertie, via a life-sized replica of her

serving as an ice cream parlor in Disney's Hollywood Studios.

Gertie the Dinosaur provides examples of the following tropes: