Film / All That Heaven Allows 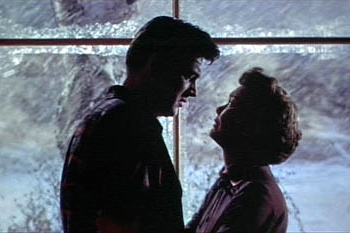 A classic 1955 romantic melodrama, reuniting the director (Douglas Sirk) and stars (Jane Wyman and Rock Hudson) of Magnificent Obsession from the previous year.

Cary Scott (Wyman) is a middle-aged, widowed mother living in an upper-middle-class suburb somewhere in Hollywood New England. Conflict emerges when she falls in love with her younger gardener, Ron Kirby (Hudson), prompting shock and outrage from Cary's friends and her college-aged, socially ambitious children due to the impropriety of such a pairing in their snobbish and conservative world.

Under pressure, Cary breaks off the relationship. But her sacrifice turns out to be for nothing when, shortly thereafter, the kids move out of her home and life, leaving her with nothing but a television set for company. Then Ron has a life-threatening accident. Can they take another shot at love and happiness before it's too late?