Series / People Just Do Nothing 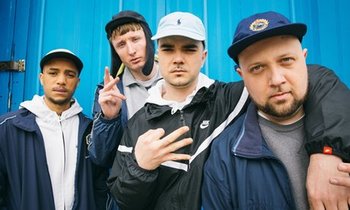 A day in the life Mockumentary comedy airing on BBC.

The BBC's cameras follow the Pretty Fly for a White Guy duo of MC Grindah and DJ Beats, the voices of 108.9 Kurupt FM, a very small time pirate radio station ran out of a filthy West London apartment block. The station specialises in garage, jungle and freestyle rap, and also hosts fellow DJs Steves, Decoy and Fantasy as they rotate shifts, pumping the beats at all hours, to the chagrin of their neighbours.

In between their "day job", the cameras also show Grindah and Beats' struggles with their relationships outside of Kurupt. Grindah has a daughter with his girlfriend Miche, a socially-conscious airhead who wants to get married. Beats is shacked up with older girlfriend Roche and stepson Craig, and later goes on to have a baby daughter with Roche. Finally, the show follows the gang's associate Chabuddy G, a scummy grifter and hustler who provides the Kurupt boys with quick and dirty solutions to various problems.

Was brought to the states in 2017 on the Viceland network. The show ended after 5 seasons in 2018. A film continuation "People Just Do Nothing: Big in Japan" is set for release in August 2021.