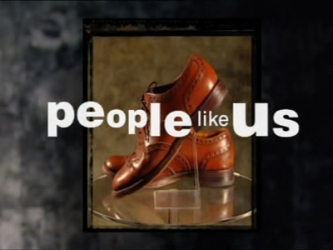 It's no surprise that estate agents are so often compared to synchronised swimmers. No matter how much pressure they are under, no matter how complex the manoeuver, their skill is to make their clients think that nothing could be easier, and that the chances of anyone drowning are slight.
— A typical bit of narration from Roy Mallard
Advertisement:

This BBC mockumentary series originally aired on BBC Radio from 1995 to 1997, and was later adapted to television in two series, the first airing in 1999, the second in 2001.

The show is ostensibly a series of straight "Day in the Life" documentaries about ordinary "people like us," as defined by their profession (e.g., "The Managing Director", "The Police Officer", "The Actor"), and at first glance looks and sounds exactly like a standard, somewhat boring, BBC documentary. Until you notice that host Roy Mallard's smooth, glib BBC delivery hides the fact that much of what he says is utter nonsense, and that he's singularly incompetent as a documentarian.

But Mallard's subjects also tend to be incompetent or wildly eccentric themselves, and despite Mallard's frequent instructions to "Pretend I'm not here," he usually winds up getting personally involved in their strange little human dramas.

The series is sometimes considered a forerunner of The Office (UK), and this is almost literally true. When People Like Us was being considered by the BBC for a third series, it was passed over... in favor of Ricky Gervais' new work-based comedy. It eventually got a true follow-up of its own, by the same creators, in 2012, a mockumentary series about the London Olympics.