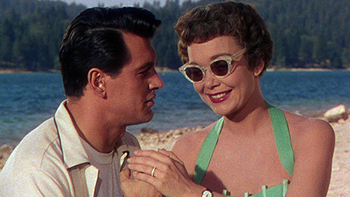 One fine day a wealthy young rich man named Bob Merrick (Hudson) is taking his boat out for a spin on Lake Tahoe. Bob, jetting across the lake at very high speeds, flips his boat. Bob nearly dies, but the timely arrival of a "resuscitator

" from the nearby home of one Dr. Wayne Phillips saves Bob's life.

Unfortunately for Dr. Phillips, he has the bad timing to have a heart attack just as his resuscitator is away saving Bob Merrick's life. Consequently Dr. Phillips dies, and his lovely bride Helen Williams (Wyman) is left a widow. Dr. Phillips was a highly respected member of his community, and his friends and family are chagrined that he died so that a hard-drinking, hard-partying rascal like Bob might live.

Bob, who has continued to drink and party after his brush with death, rolls his car while driving drunk outside the home of Edward Randolph, a friend of the Phillips family. Randolph tells Bob that Dr. Phillips was a humanitarian and philanthropist who dedicated his life to others (to the extent that he left Helen broke due to giving the family fortune away). Bob resolves to make himself over and put this life philosophy into practice. He approaches Helen Phillips, but Helen, recoiling from the man she blames for her husband's death, runs right into a passing car. She is blinded. More melodramatic plot twists follow.

The second screen adaptation of Lloyd C. Douglas' 1929 novel of the same name (the first film version, made in 1935, starred Irene Dunne and Robert Taylor), Magnificent Obsession was a huge hit and the first major Hollywood success for Sirk, who spent the next five years putting out a series of similarly weepy dramas before retiring from filmmaking.