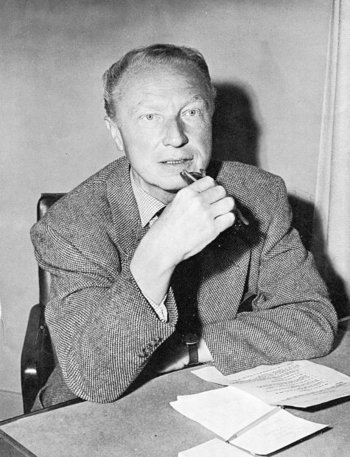 "In tragedy the life always ends. By being dead, the hero is at the same time rescued from life’s troubles. In melodrama, he lives on — in an unhappy happy end."
Advertisement:

Douglas Sirk (April 26, 1897 – January 14, 1987) directed several melodramas that defined, for some, The '50s at its kitschy worst: they were set in stereotypical Stepford Suburbia, had plots with the worst melodramatic cliches, and usually featured the most boring and obvious Happy Endings. They were also huge box-office hits at the time, but even when Film Noir and The Western became Vindicated by History, people thumbed their noses at Sirk for not being True Art. That changed — gradually, of course — thanks to the help of edgy directors like Jean-Luc Godard and Rainer Werner Fassbinder, who picked up on the subtext of his films and realized that there was More than Meets the Eye, that the real story was in the Meaningful Background Event and the visual style of the film rather than the plot that was mandated by censorship.

Put it simply, Sirk's films were first class Genre Deconstruction of the typical American family of The '50s, rather than being obvious examples of all that was conventional and conformist, his films were Unbuilt Trope that pointed out all that wrong with middle-class society and why the generation gap that defined the post-war generation happened. This was not willful reading, as Sirk had an incredible cultural and intellectual background.

He was born Hans Detlef Sierck in Germany and became an associate of the German artistic community in the '20s and '30s. He knew the likes of Max Brod, Bertolt Brecht, Kurt Weill and several others. He was a major intellectual who knew his Euripides and William Shakespeare well. To put it simply he was already a master of Playing with a Trope way before it became cool. The rise of Nazism caused personal trauma for him. His first wife was a Nazi and his second wife was Jewish; his first wife consequently won custody of their son and Sirk was barred from seeing him. He stayed in Germany even during the early years of the Third Reich in the vain hopes of rescuing his son but ultimately, he and his wife had to be smuggled out of Germany to France and then to America. His son, sadly, died on the Russian front.

In Hollywood he made his mark directing WW2 propaganda before making a series of melodramas in the '50s that starred Rock Hudson. They remain the star's best performances and Sirk felt that the latter was very underrated. He quit film-making after 1959's Imitation of Life (which would be Universal's biggest box-office hit until Airport a decade later), and in his retirement became The Mentor for several young film-makers including Rainer Werner Fassbinder, who made several films in homage to him. He would later influence filmmakers like David Lynch, Quentin Tarantino (Travolta orders the "Douglas Sirk steak," which can be served burned or bloody, in Pulp Fiction), and Todd Haynes.