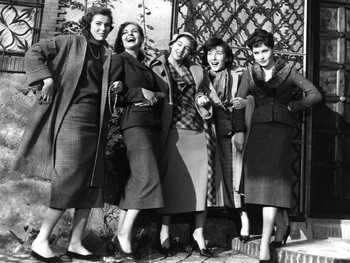 Le amiche (The Girlfriends in English) is a 1955 film by Italian director Michelangelo Antonioni. His first collaboration with cinematographer Gianni di Venanzo, it was adapted from a story by Cesare Pavese.

The plot revolves around several young, upper-class women living in Turin. It is set into motion when one of the heroines, Clelia, returns to the city from Rome only to land in a hotel and find on her first evening there that a woman in the adjacent room, Rosetta, has made a suicide attempt. Later a friend of Rosetta, Momina, joins her to find out why Rosetta tried to kill herself.