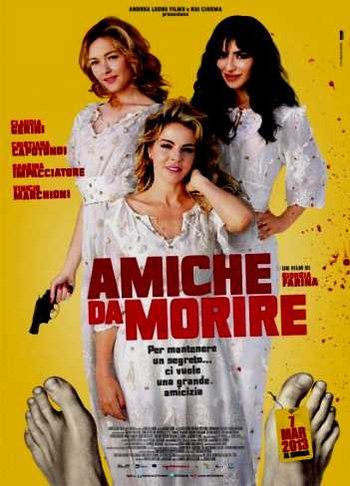 Once upon a time in a small island near Sicily, a blonde, a brunette, and a redhead who couldn't be more different. The blonde is Gilda, the bombshell High-Class Call Girl, the brunette is Crocetta the official jinx and Christmas Cake, while the redhead is Olivia, the Naïve Everygirl married with the hottest guy in town. Said hottest guy sadly turns out to be a criminal on the run, and after a fight with his ditzy wife , she shoots him in front of the other two protagonist, which are there because...well, It's a Long Story. The loot he was smuggling away turns out to be 1.000.000.€. What should they do? Keep it? Hell yeah.Hilarity Ensues since the murder and the loot needs to be hidden, and the girls are forced to work together while heavily disliking each other. They are stalked by Straw Misogynist policeman Nico Malachia, by the Gossipy Hens in town since no one knew about their "friendship" and getting away with murder needs a lot of luck, cunning and charm.