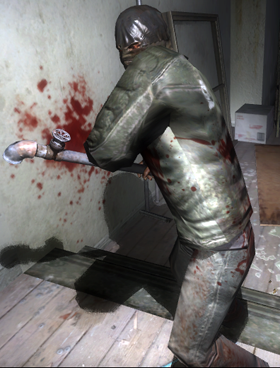 You're about to spring a bloody leak.
"Fireballs? Teleports? Fancy ninja shit? Naw son, we do pipes﻿ to the spine. All day."
— frankzerofour on Cody's Ultra Combo

Segments of piping that are usually used to channel liquids or gases also make for effective clubs. Use of them as a weapon is especially common in derelict or war-torn zones where the piping is not in use and in poor repair, allowing easy acquisition. When not in the hands of a criminal or simpleton, this is generally a weapon of last resort. Even then it is also just generally used by thugs due to its decent sturdiness, being able to easily hurt somebody and also being rather easy to get one's hands on. Lead, iron or steel as long as it's sturdy enough to bust heads with it's definitely going to be used. Sizes and lengths can vary too which helps make pipes more of a practical choice than it sounds.

Even if the piping is still installed, pipes can still be used as weapons. Broken pipe ends can be used to impale a careless enemy, valves can release scalding liquids or gases, and they can make for a good surface to crack heads against.

While most piping is generally featureless, weaponized pipes tend to feature elbow joints, valves and other types of plumping fittings or adapters in order to emphasize that they are, in fact, from a plumbing system. It can also maybe be used to increase a pipe's effectiveness as a weapon. Such as using an elbow joint as a hook and such. It all depends on the user's creativity.