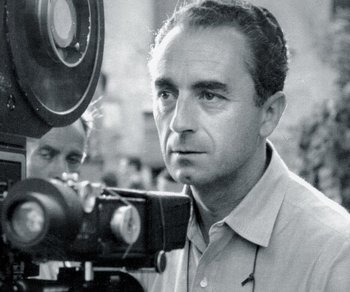 Michelangelo Antonioni (29 September 1912 – 30 July 2007), was an Italian film director, screenwriter, editor, and short story writer. He's considered one of the greatest film-makers of the arthouse era of The '50s and The '60s, part of Italy's Golden Age that included Vittorio De Sica, Roberto Rossellini, Luchino Visconti and Federico Fellini, and alongside Godard and Ingmar Bergman (who died on the same day as him), one of the most important and innovative directors in film history.

Born to a middle class family in Ferrara, he studied economics at university where his interest turned towards the arts. Before World War II, he would stage productions of Luigi Pirandello, work as a film critic for the Roman Cinema magazine and later work as a screenwriter on early neorealist films. Indeed, he and Federico Fellini worked on the screenplay for the latter's first solo feature The White Shiek. Antonioni also worked as an assistant director on French productions, notably Marcel Carné’s Les Visiteurs du Soir. After making a few documentary shorts, Antonioni made his feature debut with Story of A Love Affair (1950), which was inspired by American Film Noir and James M. Cain's The Postman Always Rings Twice but filtered with a distinctly colder and less emotional focus.

Antonioni's movies departed from the established style of neorealism which focused on social problems and was driven by a largely idealist and sentimentalist vision. Antonioni's films were bleaker, more psychological (at first), and had a strong visual style that emphasized surroundings, environments, spaces, architecture as much as plot and storyline. His movies were infamous for its slow rhythm, its innovative cinematography, both black-and-white and colour, the strong female roles in his movies (many of them having women as protagonists) and for its incredible camerawork. He's famous for his collaboration with the actress Monica Vitti, he also worked with Lucia Bosè, Gabriele Ferzetti, Alain Delon, Vanessa Redgrave, Jeanne Moreau, Marcello Mastroianni and Jack Nicholson (who presented Antonioni his Lifetime Achievement Oscar in 1995). His collaboration with Richard Harris resulted in a conflict when the actor quit the production. Later he warned David Hemming againist starring in an Antonioni film but Hemming agreed and never regreted about it.

He came to worldwide attention for his loose trilogy of alienation : L’Avventura, La Notte and L’Eclisse. Towards the end of The '60s, he left Italy and made a series of films in UK, USA, Spain and China. His most famous, influential and successful film is Blowup: a worldwide success, the definitive swinging 60s film which documented the Sex And Drugs And Rock And Roll lifestyle, and which finally put The Hays Code to pasture. He made some acclaimed films in his final years but they were little seen and not as influential as his major work in The '60s. Still, he went to influence film-makers across the world, especially the directors of the New Hollywood but also Japanese and Asian film-makers of The '80s.

References to Antonioni in popular culture