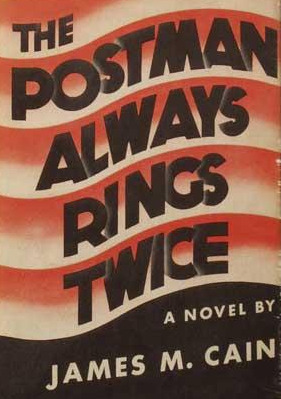 Frank Chambers, a young drifter, finds himself in a dusty diner in rural California in search of a meal. At the diner, he finds a job and a seductive married woman named Cora. Their attraction is instantaneous, and so starts their passionate affair. Cora's tired of living her life this way, married to an old Greek man named Nick whom she doesn't truly love. She wants to start over but keep the diner. Frank and she come up with the perfect solution and the perfect crime— to murder Nick. After an unsuccessful first try, they succeed. Too perfect a crime to have really succeeded, lawyers are onto them. Will they be caught, and how will they pay for their actions?

It was controversial in its day for the violence and the sadomasochistic sexual relations between Cora and Frank. It is considered one of the best novels of modern literature.

Its most famous adaptation was the 1946 film noir, which was remade in 1981 (although Warner Bros. did not initially make either English-language version, they own both of them today, acquiring the 1981 version in its 1989 purchase of Lorimar-Telepictures, and the 1946 version when Time Warner acquired Turner Broadcasting System, the owners of the pre-1986 Metro-Goldwyn-Mayer library, in 1996). There was also a 1939 French adaptation, The Last Turning, and a 1943 Italian adaptation, Ossessione.note With a war on, the producers didn't bother to get the rights to Cain's novel, so Ossessione wasn't shown in the United States until 1976.