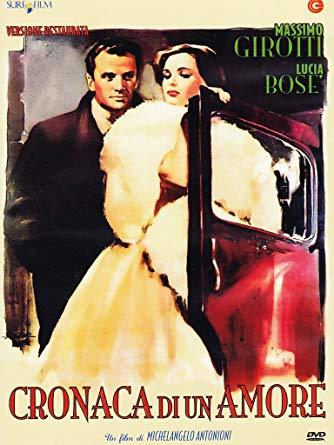 Cronaca di un amore (Story of a Love Affair) (1950) is the debut full-length film of Michelangelo Antonioni. Lucia Bosè and Massimo Girotti starred in this film.

It is Antonioni's take on The Postman Always Rings Twice by James M. Cain. A wealthy businessman, Enrico, hires a detective agency. It seems that Enrico is starting to get curious about his drop-dead gorgeous but mysterious young wife Paola, whom he married During the War. A detective named Carloni looks into Paola's background and eventually discovers a disturbing connection between Paola, an old boyfriend of Paola's named Guido, and the death of Guido's fiancée Giovanna.

Meanwhile, Guido, who now works as a car salesman, gets word from an acquaintance that someone is investigating him. He makes contact with Paola, whom he has not seen since she married Enrico seven years ago. Soon they have rekindled their love affair. Paola, who wants out of her dull, loveless marriage but doesn't want to do anything as inconvenient as give up Enrico's fortune, comes up with an idea: the two lovers can kill her husband.