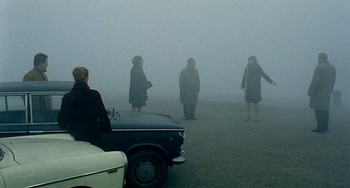 Landscape in the mist
Advertisement:

Il deserto rosso ("The Red Desert" in English) is a 1964 film by Michelangelo Antonioni. It won the Leone d'Oro at the Venice film festival that year.

The main character, Giuliana, is played by Monica Vitti as the latest in her string of significant roles in Antonioni films. Also starring is Richard Harris as Corrado Zeller.

This film might be considered a fourth installment in the tetralogy of alienation by Antonioni after the trilogy of L'Avventura, La Notte and L'eclisse; or even a fifth if one includes Il Grido. Though, it is different from the trio in that it is Antonioni's first colour film, and notably so in that it is one of the most well renowned films for its inventive use of colour. It also does not have a One-Word Title, like the other works.

Giuliana is a housewife who had previously been in a car accident and suffers a nervous breakdown. Through the film, though she remains distant from this depressive state, she is particularly distressed by the modern technology.