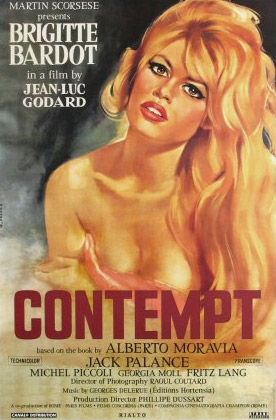 Contempt (original French title: Le Mépris) is a 1963 French movie directed by Jean-Luc Godard and starring Brigitte Bardot and Michel Piccoli. It's based on the novel A Ghost at Noon by Alberto Moravia.
Advertisement:

Dissatisfied with the direction the cinematic adaptation of The Odyssey he's financing is taking under director Fritz Lang (As Himself), American producer Jeremy Prokosch (Jack Palance) hires French playwright Paul Javal (Piccoli) to write a more commercial script. Paul tries to essentially sell his wife Camille (Bardot) to Prokosch, to get a better payment for the script. Camille, pissed with the treatment she's being given, becomes more and more aloof towards her husband.