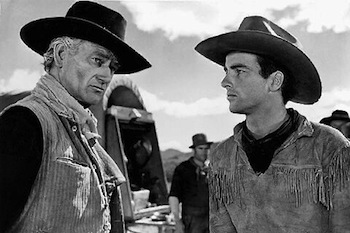 Hey, where did I see this guy?
Advertisement:

A 1948 movie starring John Wayne, the first Western directed by Howard Hawks. Perhaps the ultimate Cattle Drive movie, it is based on the novel The Blazing Guns of the Chisholm Trail by Borden Chase, which was originally serialized in the Saturday Evening Post.

Remarkable as the first movie in which John Wayne played a character with greater depth, an aging man, and a larger-than-life borderline Übermensch. On first seeing it, John Ford famously commented: "I never knew that big son-of-a-bitch could act!" Ford would go on to use Wayne in a similar way in The Searchers, and it is perhaps significant that critics have likened the Duke's character in both these films to Captain Ahab from Moby-Dick. Originally Hawks wanted to cast Gary Cooper in the lead, but Cooper demanded the screenplay be changed in order to make his character more sympathetic, so Hawks offered the part to Wayne instead. Which turned out a good thing, because not only could Wayne teach Hawks a thing or two about filming Westerns, but he also was instrumental in getting the budget doubled to $1.5 million.

In the prologue, Tom Dunson (Wayne) and his sidekick Nadine Groot (Walter Brennan) set up a farm on the Red River in Texas. Dunson's lady love Fen is killed in an Indian attack on a wagon trek, but he picks up the sole survivor, Matt Garth, and adopts him, using his cow as the first of germ of what is to become a giant cattle farm.

Many years later, Matt (Montgomery Clift) returns from the The American Civil War at a time when Dunson and the other farmers are in trouble because there is no buyer in Texas for their cattle. So the farmers pool their herds together for a 10,000-head drive to Missouri on what will be known as the Chisholm Trail under Dunson's leadership. Since Dunson in the prologue had not hesitated to shoot off the rightful Mexican owner of part of his land, it comes as no surprise that he runs the drive a bit harshly when times are tough. Although there are plenty of dangers and hairy moments on the drive, including a big stampede, to make this somewhat understandable, Dunson does not exactly behave rationally after a while, for instance in his outright refusal to change the direction to Abilene, which is nearer and where a new railhead has just been opened.

Things come to a head when after fording the titular Red River Dunson wants to hang two of his cowhands. The crew mutinies and the trek heads on for Abilene under Matt's leadership, leaving an injured Dunson behind. On the trail they rescue a trek of settlers from a Comanche attack, where Matt meets Tess Millay (Joanne Dru) and falls in love with her. Tom Dunson meanwhile has set off in hot pursuit with some hired gunmen, swearing to get the herd back and kill Matt. He later comes across Tess as well, who tries to dissuade him from his mad quest in vain.

After the arrival in Abilene, Matt succeeds in selling off the entire herd, but then has to face up with Dunson the following day. As Matt refuses to draw, Dunson can't bring himself to shoot him in cold blood and the showdown devolves into a fistfight, which is finally broken up by Tess. Says Dunson to Matt: "You better marry that girl."

Not to be confused with the time travelling Shoujo Manga of the same name. Film debut of Montgomery Clift, although the long delay after production wrapped meant that Clift's second film, The Search, actually came out first.