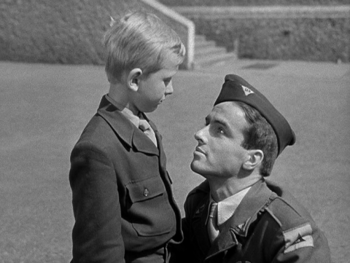 The Search is a 1948 film directed by Fred Zinneman, starring Montgomery Clift in his film debut.

Karel is a young boy in post-World War II Europe, a refugee ("displaced person") who is living in a camp for children in occupied Germany. He is near catatonic due to the traumas he suffered in the war, unable to remember his name or where he came from, only able to answer "Ich weiss nicht" when asked questions. Karel is being transported with other war orphans one day when, terrified because they think the Red Cross truck is a gassing van, the children break out and escape. Karel, still unable to speak or remember his name, runs into Steve, a kindly young engineer in the U.S. Army (Clift). Steve takes Karel in, names him Jim, and teaches him English.

After Steve is told that Jim's mother is believed to be dead, based on the Auschwitz tattoo on the boy's arm, he resolves to take Karel/Jim to America with him, despite the bureaucratic red tape. What Steve doesn't know is that while Karel's father and sister died in Nazi camps, Karel's mother Hanna is very much alive, and is tramping around Germany on foot, going from camp to camp, trying to find her son.

A 2014 movie of the same name is considered a remake, with a Setting Update to The Chechnya Wars where a young Chechen boy is being protected by an French NGO worker looking to reunite him with his siblings.