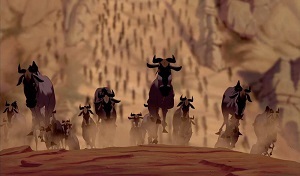 Beware the thundering herd.
Don't be fooled, it isn't thunder. Staying put would be a blunder.
— Jumanji
Advertisement:

In fiction, compared to predators, herbivores are usually pretty harmless. Herbivores Are Friendly, after all, and a gentle, grazing cow means far less threat than a fierce tiger.

Now imagine hundreds of those cows, running together and trampling everything in their way. Not so harmless anymore, right? Bonus points if they are Xenophobic Herbivores.

An Animal Stampede is when a large group of animals, usually herbivores, get startled and start mindlessly running from the perceived threat, destroying everything in their way. They are portrayed as a destructive force of nature, and often injure or kill the characters that get in their way. Note that most of the time the stampeding animals want to get away from the predators without the intention of hurting anyone; but some of the more aggressive species, such as buffaloes or rhinoceroses, may start a stampede towards the perceived threat. Since these animals often have horns, accidental or deliberate Horn Attacks may be involved.

Rhino Rampage is a subtrope involving stampeding rhinos. Swarm of Rats is a smaller version involving rats and mice. See Escaped Animal Rampage, if the stampeding animals escaped from a zoo or another confinement. May occur during a Cattle Drive. Compare Dash Attack, which usually done deliberately by a single person but may overlap with this if done by a big group, and Onrushing Army, where a group of soldiers charges at another army in a similar manner. Not to be confused with Thundering Herd, which is an angry mob of characters chasing someone, comically drawn as a giant dust cloud. In a video game, a stampede can be an Advancing Wall of Doom.

This can overlap with Animals Hate Him, especially if the carnivores and omnivores also join in mutual hatred of a certain character.

Has nothing to do with Vash the Stampede.