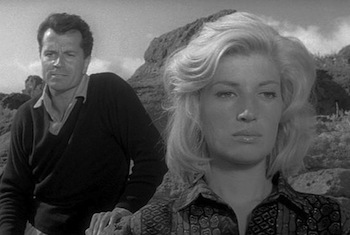 L’avventura is a 1960 film by director Michelangelo Antonioni.

Two friends, Anna and Claudia (played by Monica Vitti), meet with Anna's boyfriend Sandro and go with other friends on a trip to a rocky island. While they are there, Anna disappears without a trace. The others start looking for her, but with exception of Claudia and Sandro, they show no particular interest in the result of the searches...

If you saw any other movie, its plot would deal with Anna's disappearance and the effects it had on the characters. If that's what you're looking for, don't even bother with this movie.

Halfway through the movie, Anna is completely forgotten by everyone, including her friend and her boyfriend, and is only mentioned once in a while, in case you don't remember how the film began. The movie deals mainly with Sandro and Claudia's relationship (avventura, beside an adventure, means a fling in English.)

So... The movie has almost no plot. Yeah. That means it's not for everyone. The movie replaces plot with the beautiful sceneries, interesting Character Development and of course, playing with the viewers' expectations.

As an aside note, the movie had one noticeable instance of Vindicated by History: When it was released, the public found it so slow and boring that they booed it in Cannes. It was after a second screening, and a bunch of essays written by critics defending the movie, when they started to admire it more.

L'avventura is the first installment in Antonioni's trilogy of alienation that includes La notte (The Night, 1961) and L'eclisse (The Eclipse, 1962), all made in B&W. Sometimes Il deserto rosso (The Red Desert, 1964) is included in this unofficial series making it a tetralogy, despite being in color and not having a One-Word Title. These films are made in a similar manner characteristic of the "slow cinema". They research the condition of the contemporary middle-class educated Europeans, though L'avventura in particular concentrates on the upper-middle class. Monica Vitti stars in all of them, playing main characters in three films and a tritagonist in La notte.

About Elly by Asghar Farhadi was clearly influenced by this film while not qualifying for a remake.