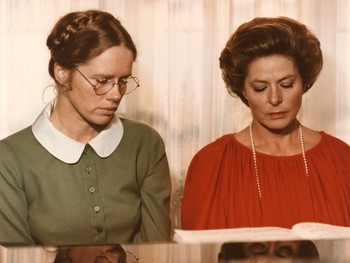 Autumn Sonata (Swedish title: Höstsonaten) is a 1978 Swedish-Norwegian-West German drama film written and directed by Ingmar Bergman, starring Liv Ullmann and Ingrid Bergman. The latter, a namesake of the director but unrelated to him,note although, coincidentally enough, Ingmar's wife was also named Ingrid had never worked with him before; this collaboration happened very late in her life, when she was already terminally ill, and was her final appearance in a feature film.note Her actual last role was as Golda Meir in a TV movie biopic, A Woman Called Golda.

The film deals with a visit which the acclaimed pianist Charlotte Andergast (Ingrid Bergman) pays to her daughter Eva (Ullman), who lives in a secluded country house. At first the two women appear friendly, but fairly soon the truth about their past relationship becomes evident to the viewer and the story turns into one big Cerebus Syndrome.

Both Bergmans received Academy Award nominations (Ingrid for Best Actress, Ingmar for Original Screenplay), and the film has sustained a strong reputation since. It's received a Screen-to-Stage Adaptation several times (plays written in Swedish, English and Spanish, plus an Opera), and was adapted into Hindi as the 2003 Bollywood drama Tehzeeb.