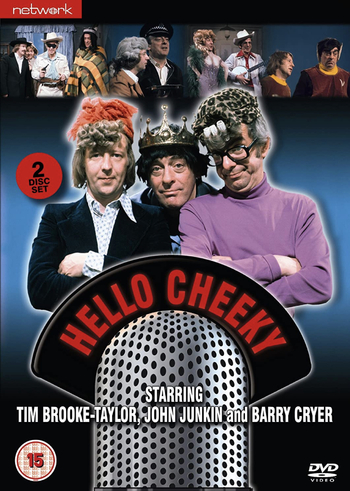 Hello Cheeky was a Sketch Show that ran on The BBC between 1973 and 1979. The main cast and scriptwriters were Tim Brooke-Taylor, Barry Cryer and John Junkin, with supporting roles and piano accompaniment provided by Denis "Charmer" King.

The format of the show was loose at best, as it was entirely focused on jokes. However, a typical episode would consist of twenty minutes' worth of quick sketches, puns, and jokes, with some novelty songs thrown in for good measure, and the last ten minutes would be taken up with an extended sketch, usually under the heading "Armpit Theatre

presents..." Either that, or a series of Twisted Echo Cuts taken to their logical extreme by "playing three programmes at one and the same time", which resulted in jokes, puns, and Double Entendres as the dialogue in the programmes were cut together to form sentences.

In 1976, the show was adapted for television by the Yorkshire branch of ITV. More or less everyone agrees that no great steps were taken to make the material more visual. This version lasted for 13 episodes before fading away.

Counting the twelve surviving episodes of the TV show and the five seasons of the radio show, coupled with three Christmas specials, more than 70 episodes were made, all-in-all.

Meanwhile, in a trope list, not a thousand miles from Crewe Junction...

While I'm Sorry I Haven't a Clue is generally described as a spiritual successor to ISIRTA, the presence of Barry makes Hello Cheeky more closely related.