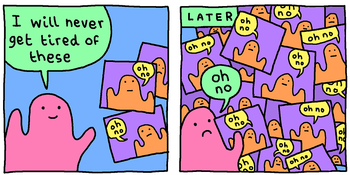 "It's a running gag... well, it's limping a bit by now."
— Paul Merton, Have I Got News for You
Advertisement:

There we go. Anyhow, the use of a Running Gag is generally constrained over the course of one episode. But there are some jokes that the writers thought are just so funny that they should be used in another episode, and another, and another and another. Even if it isn't Once per Episode, it's still squeezed into the series wherever they see fit— fit— fit— fit— fit— *THUMP*

Okay. After a while, though, the writers will come to realize that the bit has started to peter out. Then one can be sure to start seeing plenty of Lampshade Hanging and heavy subversion in the effort to keep the joke fresh, or tolerated. Once that wears thin, one can expect the bit to be dropped like a Christmas ham— ham— ham— ham— ham— *SMACK*

Okay, that joke's really wearing thin. Before we continue, let's get that audio equipment fixed.

There, fixed. Anyhow, for this to be a trope, examples should not be subjective. They should be based on whether the writers have reacted to its overuse (lampshaded or used it less), rather than just a feeling that the gag has been used too much.

The inevitable fate of many a comedy Catchphrase. Commonly confused with Overly Long Gag, which is when a single gag is stretched out for an irritatingly long time. That said, for any joke, good or bad, enough repetition can make people decide it's an Overused Running Gag.

The next step after this is Running Gagged, where the joke is terminated with extreme prejudice, once and for all. Or until they bring it back.

Okay, if it does that again, that audio equipment is gonna get a dose of C-4.

Note: This is for In-Universe Examples Only. Do not use this trope to Complain About Running Gags You Don't Like.