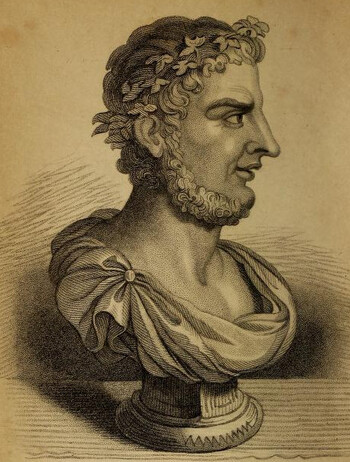 Portrait by S.H. Gimber from 1837
"... Oh, I know
the advice my old friends would give, on every occasion —
'Lock her up and bar the doors.' But who is to stand guard
over the guards themselves? They get paid in common coin
to forget their mistress's sex-life: both hide the same offence.
Any shrewd wife, planning ahead, will first turn the heat on them."
—Decimus Junius Juvenalis, Satire VI, O29-O34 (translation by Peter Green)
Advertisement:

Decimus Junius Juvenalis — generally known as Juvenal — was a Roman satirist who lived in the first and second centuries AD — roughly from the time of Nero to the time of Hadrian. He's perhaps best known as the originator of the phrases, "Who will watch the watchmen?"note Quis custodiet ipsos custodes? and "Bread and Circuses."note panem et circenses He lends his name to the brand of satire known as Juvenalian, which consists of scathing attacks on people and things the writer considers to be evil.

His satires are written from the point of a financially distressed member of the upper classes — the kind that in Victorian England would have been called "shabby genteel" (or in other words, a literal Impoverished Patrician). The narrator saves his bitterest vile for the upstarts, ex-slaves, and foreigners who dominated early Imperial times, but he spears almost everyone and everything: upstart women who don't sit at home and spin, gay men who think they can marry, uncaring patrons who feed their dependents plain olive oil while keeping the extra virgin for themselves, the teeming, dangerous city that gets worse every day, the cruel, rapacious Emperor who cares more about the delicacies of his own table than he does about starving soldiers (probably talking about Domitian, regarded by the upper crust—somewhat unfairlynote Domitian was ruthless and kind of nasty, but policy wise he was a decent Emperor; however, he had a habit of disregarding the Senate (still more or less run by patricians) as the powerless snobby social club it by then really was, and after enduring a conspiracy/revolt against him in 89, he unfortunately started to get a bit paranoid and execution-happy. This led to a conspiracy that actually killed him.—as the Nero of his time).note We should note that even Nero wasn't entirely the Nero of his time: according to Tacitus, he wasn't even present in Rome during the fire in which he is apocryphally held to have fiddled (which would have been a particularly remarkable feat, since the fiddle wasn't even invented for some 1,400 years after his death), and in its wake, he opened his palaces to those who had been rendered homeless by the fire, he distributed food to the hungry, he personally paid for the removal of bodies and debris, and he instituted building codes to prevent another such fire from occurring. He was still The Caligula in numerous other ways, though - his reputation for debauchery and murderousness is quite deserved.

It's usually assumed that the narrator is Juvenal himself, frustrated into invective by the "moral degeneracy" of his time, but a modern Alternative Character Interpretation is that Juvenal was actually poking fun at the kind of stuffy, stuck-up old guard that would come up with these things. It's plausible, given that Juvenal (like Horace) might have been the son of an ex-slave himself. Or he might have been the son of a noble. Nobody really knows.

One previously unknown section of Juvenal's Sixth Satire - the one about women - was discovered in 1905. The section contained such sophisticated obscenity that only one man in the UK was considered erudite enough to translate it.

Juvenalian satire—satire that attacks what the author perceives as social evil through moral outrage and savage ridicule— is named for him.

His satires survived because they were critical of Pagan Rome, something the average medieval monk approved of.

He is the Trope Namer for Bread and Circuses and Who Watches the Watchmen?.