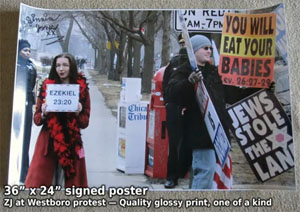 I mean, here you are, at a rally for the expressed purpose of denying your fellow citizens their equal rights, and all of a sudden these people show up. And they're just standing there, in front of you. And they actually have the nerve to disagree with you. Who could have seen that coming? I can only imagine the deep and enduring anguish of being confronted by people who don't share your "views".
— From I'm sorry, NOM

Zinnia Jones is a social/political commentary Internet show, written and hosted by the titular Zinnia Jones and distributed through her YouTube channel

. Zinnia usually speaks about issues that connect to religion, politics and homophobia, but one of those three is enough and sometimes entirely different issues pop up as well.