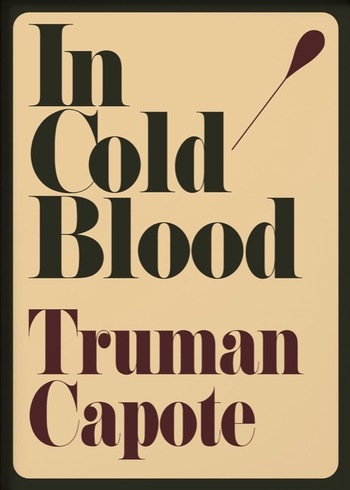 "As long as you live, there's always something waiting; and even if it's bad, and you know it's bad, what can you do? You can't stop living."
"I thought that Mr. Clutter was a very nice gentleman. I thought so right up to the moment that I cut his throat."
— Perry Edward Smith
Advertisement:

Considered by somenote See the YMMV about Operation Massacre about this to be the Trope Codifier for the non-fiction novel, In Cold Blood was written by Truman Capote and published in 1966.

It tells the story of Perry Edward Smith and Richard "Dick" Hickock, two recently-paroled convicts in 1959 Kansas. While still in prison, Hickock had learned from a cellmate named Floyd Wells about a farmer he'd worked for named Herb Clutter. According to Wells, Clutter kept a safe in his house with lots of cash inside. So, the two decide to rob the place in the dead of night, Leave No Witnesses by means of a Family Extermination, and head for Mexico with the cash. And that's what they do. Except for one small thing: there was no safe.

Capote originally started writing about the massacre for an article in The New Yorker. He was able to interview both Smith and Hickock for the project shortly after their arrest, and — assisted by his friend and fellow writer Harper Lee (of To Kill a Mockingbird fame) — got a lot of additional info from local residents and law enforcement officials. The huge amount of research they dug up led Capote to change course during development and expand the article into a book.

In Cold Blood was adapted into a well-regarded 1967 film directed by Richard Brooks, starring Robert Blake as Smith and Scott Wilson as Hickock. It was also made into a TV miniseries in 1996 starring Anthony Edwards as Hickock and Eric Roberts as Smith. The story of its creation was told twice within a year: first as Capote in 2005, and then as Infamous in 2006.