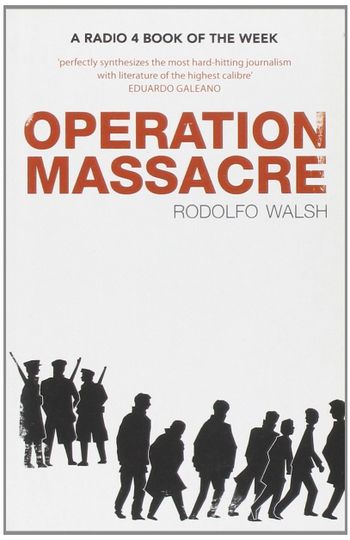 Operation Massacre (in Spanish Operación Masacre), is an Argentinian Non-Fiction novel written by Rodolfo Walsh and published in 1957. It's a novelization about a series of executions afterwards the Military Coup against Juan Perón. It's considered the first non-fiction novel in history, dating nine years prior to Truman Capote's In Cold Blood. The plot takes place one year after the Coup d'Etàt, when a counter strike against the Military government has failed, and the military forces seek possible civilian rebels. The novel is the story of one of the seven survivors. He tells about the executions of José León Suárez, where he and several other men were imprisoned and shot. This ended with the deaths of five men: Nicolás Carranza, Francisco Garibotti, Carlos Alberto Lizaso, Mario Brión and Vicente Damían Rodríguez, and seven survivors.