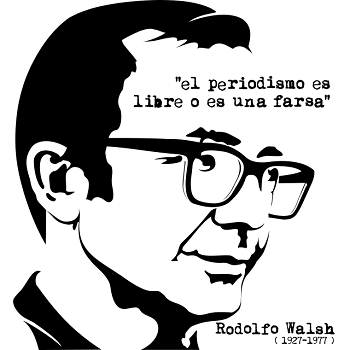 Journalism is free or is a farce
"Reproduce this information, circulate it by any means at your disposal: by hand, by machine, by mimeograph, orally. Send copies to your friends: nine out of ten are waiting for them. Millions want to be informed. Terror is based on lack of communication. Break the isolation. Feel again the moral satisfaction of an act of freedom. Defeat the terror. Circulate this information."
—Rodolfo Walsh, heading of ANCLA's communications.
Advertisement:

Rodolfo Jorge Walsh (January 9, 1927 – March 25, 1977) was an Argentinian journalist and writer, considered the founder of investigative journalism in his country. He was not impartial. He didn't intend to be so either, but his works have taken long investigations from several sources. His works were so political in nature, that he even joined the guerrilla Montoneros in an intend of fighting the injustices that affected Argentina. Eventually he began to question the views of the organization as well.

Besides journalism, he devouted himself to writing several short stories and crime novels. Many of his works involve a political reading of reality. Maybe his most known work is Operation Massacre, a novelization about one of his investigations regarding a series of executions of gremialists and left wing militants during the dictatorship of Aramburu, in 1957, two years after the Military Coup to the second democratic presidency of Juan Domingo Perón.

There's also Open Letter From A Writer To The Military Junta, (in english here

) a cunning masterwork of political journalism protesting against the National Reorganization Process's economic policies, that were having a greater effect on ordinary Argentines than their insane human rights abuses. This letter was composed and distributed to every media available in Argentina and to the international press, but ultimately it costed him his life. In Argentina, the letter was distributed underground, because the media was controlled by the military. Prior to his death, in 1976 he had created ANCLA (spanish acronym by Clandestine News Agency), an underground press that distributed information hand-to-hand, in response to the Military's censorship.He was killed in a shooting in March 25, 1977, one day after this letter was distributed, and a few months after the forced suicide of his youngest daughter, Victoria Walsh, in a confrontation with the army at Corro Street.

He has left behind a big tradition both in journalism and in literature and several political organizations (mainly in public Universities) are named after him.

Tropes associated with him

Lo bajamos a Walsh. El hijo de puta se parapetó detrás de un árbol y se defendía con una 22. Lo cagamos a tiros y no se caía el hijo de puta. note We take down Walsh. The son of a bitch covered himself behind a tree and defended himself with a 22'. We shot the shit out of him and the son of a bitch doesn't fall
—declaration of the ex official Weber.