Literature / The House of Asterion 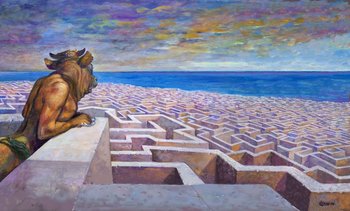 The house is the same size as the world; or rather, it is the world.
And the queen gave birth to a child who was called Asterion.
— Apollodorus: Bibliotheca, III, I
Advertisement:

First published in 1947 in the Los anales de Buenos Aires newspaper, "The House of Asterion" ("La casa de Asterión") is a short fantasy story written by Jorge Luis Borges, then republished in 1949 in The Aleph.

Prince Asterion has heard all the nasty rumors said about him, where he is called arrogant, a misanthropist, mad, and is a prisoner of his home of infinite doors. Asterion denies these rumors, trying to tell himself that his life is ordinary, and enviable. Every nine years, nine men are sent to his home, and Asterion happily greets them and puts an end to their woeful existence. One of these men has time to prophesize that Asterion will find a redeemer. Because of that, he calmly awaits him and even wonders what he looks like. Is he a man? A bull? A bull with the head of a man? Or is he the opposite, like Asterion?

The short story was dedicated to Marta Mosquera Eastman. There's very little information about her, but what little information is available is that she was a friend of Borges at the time, and she later moved to Venezuela to work as a reporter.

Tropes in the work: