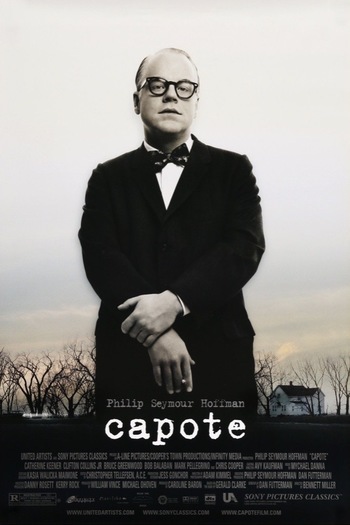 Capote is a 2005 biographical film about author Truman Capote, depicting the events surrounding the writing of his classic non-fiction novel In Cold Blood. Shot mostly in Manitoba during the autumn of 2004, the film was released on September 30, 2005, to coincide with what would have been Capote's 81st birthday. It was written by Dan Futterman and directed by Bennett Miller, with Philip Seymour Hoffman starring in the title role.

The plot of the film begins with the discovery of the dead bodies of the Clutter family on their Kansas farm in late 1959 by a family friend. While reading about the killings in The New York Times, Capote is riveted by the story of the family and contacts William Shawn (Bob Balaban), then-editor of The New Yorker, to announce that he will personally document the tragedy. Along with his childhood friend and fellow writer Nelle Harper Lee (Catherine Keener), Capote then travels to Kansas to interview those involved with the case, including the accused killers Perry Smith (Clifton Collins Jr.) and Richard Hickock (Mark Pellegrino).